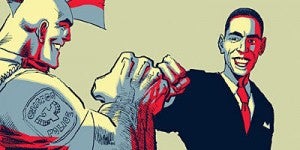 On today's episode of The View, President Barack Obama was quizzed on pop culture trivia and, along with topics like Keeping Up With The Kardashians and Dancing With the Stars, he was asked to name superheroes seen in the film version of  The Avengers. "I saw The Avengers," said the President, "so this is easy. You've got the Hulk, Captain America, Iron Man…" It was a brief and shallow interaction but not only does it show the degree to which The Avengers film has broken in the mainstream, but considering that Obama is a widely-acknowledged comic book fan (who has even starred in a few Marvel titles), it's a little surprising the length of the pause between Captain Americaand Iron Man's names. Maybe he was baffled by the team's lack of a Ms. Marvel?

Hocus Pocus Star Reveals Why She Didn't Return for the Sequel

WWE's Seth Rollins Would Like Another Crack at Bray Wyatt Feud, Addresses Difficulty in Working With That Character