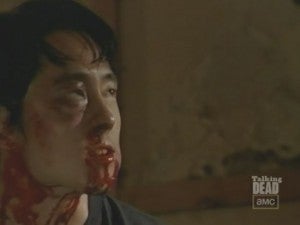 The Parents Television Council is upset about the amount of gore and violence on The Walking Dead, and they feel the show is misrated. In a PTC press release, the organization noted that their President Tim Winter had written to former Senator Gordon Smith, who is Chairman of the TV Parental Guidelines Monitoring Board, asking him to address what they felt was a misrating of The Walking Dead television program.

Winter wrote, "Throughout its run, the AMC program The Walking Dead has featured some of the most graphic and brutally intense violence and gore imaginable. In the current season alone the show has depicted hundreds of scenes of grisly murder both of living and ‘undead,’ but human, characters. The intensely violent content has included depictions of the cleaving of human skulls with a machete, extreme gun violence including graphic depictions of blood and brains splattering after gunshot wounds, and the use of a sharpened human bone as a weapon to stab another character.”

In addition to the extreme violence, Winters also expressed concern over the “numerous instances of crude indecent language.” Every episode of The Walking Dead television show has been rated as TV-14, which means the show has content unsuitable for a child under 14. However, the PTC feels that the show is too violent for even a 14 year old and has expressed the content is appropriate for an adult-only audience.

Winter also wrote, "PTC members from around the country have sent thousands of letters to AMC asking them to reconsider the inaccurate age-based rating it has assigned to the program, but with no response. Therefore, on behalf of our better than 1.3 million members, we call on you and the TV Parental Guidelines Monitoring Board to immediately take any necessary steps to insure that this program is rated accurately, appropriately and for the audience for which the show is designed. For the TV Ratings system to work as it is designed, the board and you as its chairman can do no less.”

PTC Calls The Walking Dead Out For Gore And Violence