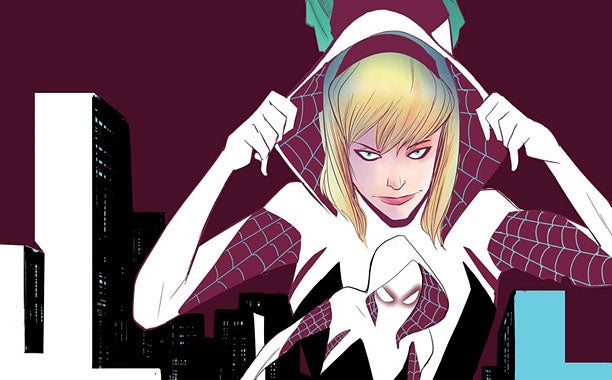 Welcome back to Public Menace, ComicBook.com's ongoing exploration of what makes Spider-Man a pop culture icon, a piece of modern mytholgy, and just a really compelling comic book character.

As promised, we're following up our inaugural post with part two of the double feature interview with Marvel Senior Editor, Nick Lowe. In the first half of our conversation, Lowe broke down what made Spider-Man such a relatable character, revealed the final fate of Superior Spider-Man, and discussed the importance of diversity in comics. He even unveiled some gorogroues artwork, too.

In today's second half, Lowe reveals how Spider-Gwen became such an unexpected hit, what's next for Spider-Man's world as Marvel's Secret Wars hits, and which villain he's like to see on the big screen in 2017's Spider-Man reboot. Plus, we have some more exclusive art from Amazing Spider-Man #16, Silk #2, and Amazing Spider-Man Special #1 in the gallery below. 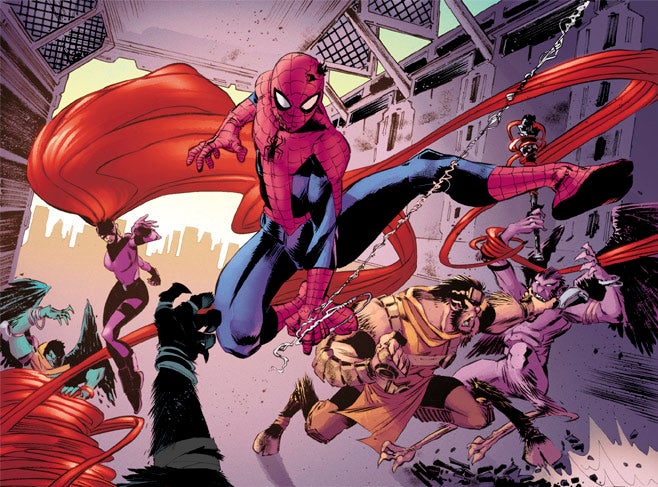 Regarding Spider-Verse's two spinoff titles, Silk and Spider-Gwen, why did you decided to give those two characters their own series? Was it always the plan, or were you waiting to see which Spider-Verse character received the best response?

When I came into the Spider-Office in January 2014, I knew that the other Spider-Office books like Superior Spider-Man Team-Up was going away, and I wanted to do more Spider-books. Spider-Woman was the first title I pushed for, because she hadn't had a book since that great one by Brian Bendis and Alex Maleev. It seemed crazy that she didn't have her own book. So, I started planning towards that Spider-Woman book launching alongside Spider-Verse. Then once we got into Original Sin, Silk became such a large part of the Marvel Universe with her ties to Spider-Man. I really liked the character, and thought that she had some legs to her. I knew she could support a book of her own, especially with what he had planned for her in Spider-Verse. That was planned out long in advance.

But with Spider-Gwen, that one was a surprise. I hired Jason Latour and Robbi Rodriguez to do Edge of Spider-Verse #2, and the first thing that Jason pitched was the Uncle Ben as Spider-Man character. He did this great drawing of him and Uncle Ben both in costumes jumping around, and Uncle Ben's costume really resembled Peter's original wrestling costume. I talked to Dan Slott about it, and he really wanted to hold on to that moment. And he was absolutely right. That Uncle Ben reveal in Amazing Spider-Man was huge.

So Jason and I went back to the drawing board, and thought of other characters before finally landing on Spider-Gwen. We originally planned to just give her a one-shot outside of the main Spider-Verse series. But then Robbie did the design, and it was so cool. And Jason Latour turned in the script, and it was so good. But things changed, and when Edge of Spider-Verse #2 kept going back to press, we realized that we couldn't not do the book. I wish I could say Spider-Gwen was part of my master plan from when I came in, but it took on a complete life of its own. And I think that's one of the reasons why it's so successful. Now that this world has a life of its own, I can't wait to see what happens next.

And why do you think she caught on so well with readers?

I think it's a lot of things. First and foremost, Gwen casts such a huge shadow in Spider-Man's world. She's a lot of Spidey fans' favorite character, especially for those who've been around for a while. Then Emma Stone's great performance in The Amazing Spider-Man movies introduced her to a younger audience. She brought the character into Spider-Man's story in a new and modern way. Another huge factor was just Robbie's incredible costume design. The amount of attraction that costume's generated for the character is incredible. There were even professional artists—who don't draw for free—making these images of Spider-Gwen for free! It was crazy. Also, Jason just had a great concept for her. I love that she's in a band called The Mary Janes. Her characterization with her dad is spot-on, and the fact that her universe's Peter is dead gives the book that extra strength. Then the Sea Monsters released their "Face It Tiger" song, based on the Mary Janes. It all just compiled into this freight train of goodwill and good storytelling. But what really clinched it was just how good Edge of Spider-Verse #2 was. It has so much energy, and a tone unlike anything else on the stands. It's really special. 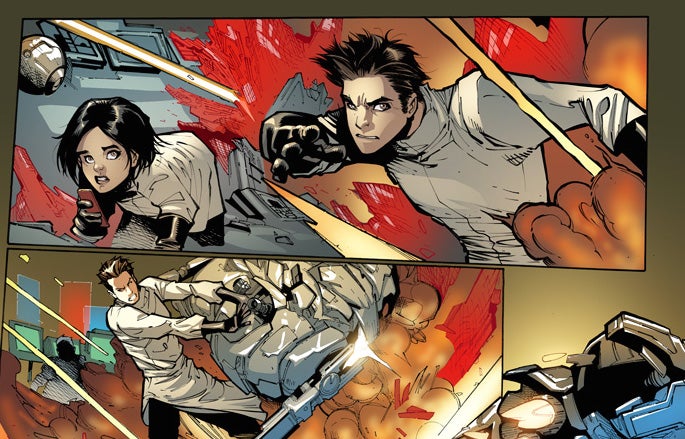 Definitely. I wanted to look at Spider-Man's supporting cast in the main series for a bit. What's going on in their world, and who's a supporting character that fans should pay attention to moving forward?

The arc immediately after Spider-Verse focuses on Parker Industries, so you're going to see a lot of Anna Maria. You'll see a lot more of Johnny, and some Clayton Cole, from Amazing Spider-Man: Learning to Crawl, as well. He's a part of Parker Industries and has a big story coming up.

And about a third of each of the arc is focused on Black Cat. There's a really cool Black Cat story running through issues #16, #17, and #18 that I'm really stoked for people to see. Also, a supporting character from Dan's run who was in Superior Spider-Man, the Wraith, is coming back. She's a huge part of the Gerry Conway written Spyral story that's going on in the Point-One issues running alongside Amazing Spider-Man. It's such a cool story, and Gerry hasn't lost a step. For Marvel and general comics readers who don't know how good Gerry Conway is, this will be a big reminder of why this guy was the biggest writer in the industry for a long time. His scripts are fantastic, and I think people are going to see a lot more of Gerry coming up. 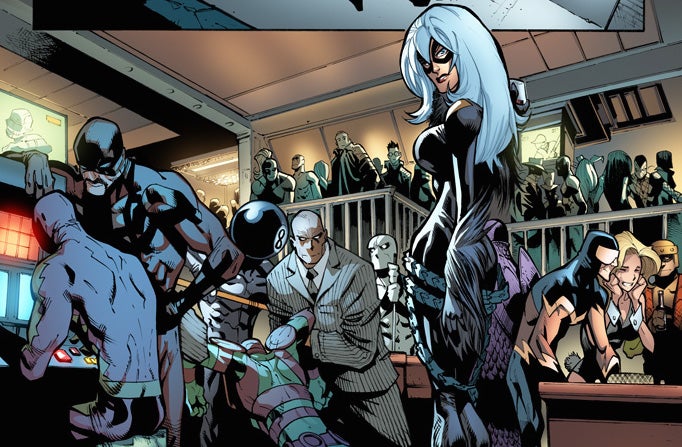 I can't say much about it yet, because it has a lot to do with Secret Wars. But it definitely is the next step from Amazing Spider-Man #15, where you saw Anya Corazon and Spider-Man UK talk about trying to help worlds without Spider-Men. This is the logical next step to that story, which focuses on those two. We'll also see Spider-Man Noir and Spider-Man India. Spider-Gwen will also be there, of course, and even Spider-Ham. They'll be going up against some threats that will stun you. It's going to be great. Mike Costa is writing it, Alejandra Rojo is illustrating it, and Nick Bradshaw is providing the covers. It's a fantastic series.

You had me at Nick Bradshaw. So is that the extent of the Spider-Office's involvement with Secret Wars?

And actually, fans might recall a teaser we put out a while ago with Mary Jane, Peter, and little girl that very much looks like the two of them. You should definitely keep an eye out for more on that. There's some payoff to that coming soon. 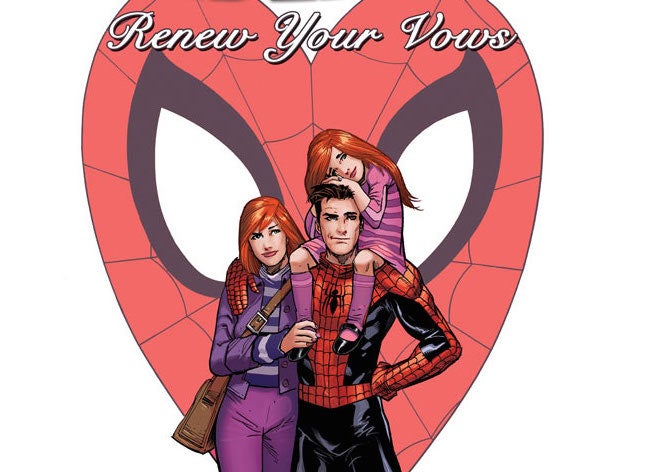 You've been the main Spider-Man editor for just over a year now. After working in the X-Men office for so many years, how has the transition been? What are the differences between corralling franchises like Spider-Man and The X-Men?

It's been a lot of fun. There's definitely been a learning curve to almost-exclusively editing solo books after editing almost exclusively team books for years. It's a big change, but a welcome one. It can be a little exhausting working on so many team books with so many moving parts, but it's been a lot of fun. The Spider-Office is incredible though, with Ellie Pyle before she left, Devin Lewis, and Sana Amanat. We added Charles Beechum to our roster recently, and Jake Thomas joined us from The Avengers office. It's an incredible team putting out great books. Here's hoping year two is even better.

(laughs). Honestly, I didn't even know that there was a controversy. But in Kevin Feige I trust. Feige's done such incredible work at Marvel since Iron Man. I just can't wait to see what they do with Spider-Man.

And if there was one storyline that Marvel Studios adapts, or one villain its includes in the 2017 reboot, what/who would you like it to be?

There's just too many to chose from!

I would love to see the classic Dock Ock moment from the Stan Lee/Steve Ditko run where Spider-Man is trapped under that big machine and has to lift it up. That would be such a cool moment on the big screen. As far as villains go, I'd love to see Mysterio. We've never seen him before. He'd be a lot of fun, but there's just so many great Spider-Man stories. We probably won't need Spider-Verse for a while, but hopefully someday! At some point, that would be insane.

Agreed. Thanks for taking the time to chat with us, Nick.

Who would you like Public Menace to interview next? What other features and topics would you like to see in this column? Let us know in the comments section, and we'll do our darnedest to make it happen. It's what Spider-Man would do. Until next week, web heads.