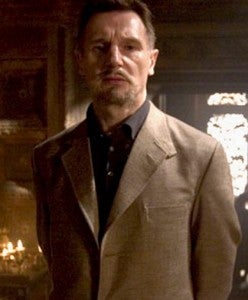 Iconic Batman villain Ra's al Ghul, who appeared in Batman Begins and The Dark Knight Rises, may be headed to the small screen. Green Arrow TV reports that the fifth episode of Arrow's upcoming second season on The CW will be "League of Assassins," a reference to the organization that Ra's al Ghul runs in the comics. Of course, we may not see Ra's himself; Malcolm Merlyn, who appeared in the show's first season, has connections with the location as well. Still, early reports had the title of the episode listed as "The Demon's Head," which is what Ra's al Ghul's name translates to. It's not quite clear whether those reports were right and the title changed, or whether they were never right. There's a bit more speculation on that at the GATV link above. Ra's has appeared on numerous animated series and in the film Batman: Under the Red Hood. His daughter, Talia al Ghul, appeared briefly in Under the Hood and was a principal antagonist in The Dark Knight Rises. The presence of Ra's al Ghul (potentially) may signal a shift in the way DC Entertainment and Warner Bros. Television work with the Arrow showrunners; in the past, as on Smallville, Batman characters have been off-limits.

Ra's Al Ghul Seems to Be Headed to Arrow