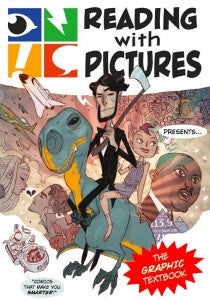 , a nonprofit organization dedicated to using comic books in the classroom to help promote literacy, is less than three weeks away from the deadline for The Graphic Textbook, its second Kickstarter-funded comics anthology in two years.

The organization's first book, Reading With Pictures Vol. 1, was funded through the popular crowdsourcing site in 2010, and included work from Jill Thompson, Chris Giarrusso and many more. The book has since been a major source of revenue for Reading With Pictures, a consistent seller on the organization's website and proof of concept for The Graphic Textbook, a volume that has been produced to the standards of many educational curricula and therefore, when produced, can be used as a literal textbook in classrooms around the country.

The Kickstarter is at around 20% of its total goal right now, roughly on pace with what the first book had done at this stage in its fundraising efforts, but the project is in a whole other league as compared to its predecessor. The first time around, they were trying to raise $10,000 to pay to print the book, but all of the art was donated. They've already exceeded that amount (they did so in a week), but the goal this time is much more ambitious. While the creators are all taking pay cuts to work for the organization, the fact that they're creating custom work that needs to meet exacting standards makes it impossible for most of the creators to simply work for free. "I don't get paid anything until we hit $100,000," Elder said [the project's goal is $65,000]. "So I'm working for free, but I couldn't ask that of the giant team that we've assembled."

“The first book was a benefit book—everyone donated what they made," Founder Josh Elder said in an interview with ComicBook.com's Panel Discussions podcast. "We're very proud of what we made, but The Graphic Textbook represents an attempt to actually change everything in the way comics are used in classrooms.”

He said that while they want to create the book as inexpensively as possible, the most important aspect of the project was creating something that could actually be accepted by educators. "That requires a lot of effort, and requires a fair amount of money," Elder said, explaining that digital production, layout and other costs are fairly fixed, and necessary in order to be accepted by schools. "That's why we've got that $65,000 price tag up there--because that's what it costs to produce something that can truly be a game-changer."

Coupled with digital support from iVerse, for whom Elder also works, The Graphic Textbook will be available both in print and in digital editions available on virtually every smartphone or tablet device, giving educators an opportunity to cheaply obtain digital copies for classroom use as well. He says that when he approached iVerse, back before he was working for them, about setting up a library program for comics and graphic novels, he was shocked by how receptive they were. According to Elder, he made a presentation and, after telling them what he wanted based on feedback from educators and librarians, iVerse made no changes and simply said, "Yeah--that sounds like a good idea."

Elder says that while publishers he has spoken to have been supportive and interested, the ambition of the project and the lack of DRM on the digital edition have pushed them out of their comfort zone.

"Part of the reason for this Kickstarter is to prove to the publishers and to the educational establishment that there's a real need for this, and a market for it, and that will help make us a sustainable entity in the long run. This Kickstarter isn't just making the book but proving the value of it to the marketplace, to the world."

He talked about TeachingComics.org, a site which has now merged with Reading With Pictures in order to remain viable after they became too large to sustain themselves; The Graphic Classroom, too, will be added to the RWP site, supporting the features they've been making available to readers for some time.

In closing, Elder tried to explain the project: "All these forces are working together to change the game in terms of the way comics are used in education but Reading With Pictures wants to be a facilitator; we want to accelerate that change, and that's what we're doing on the website. The Graphic Textbook is a vector for that, too. It's a product, the sales of which underwrite everything else we do--but it's a vector in and of itself."

Check back with ComicBook.com next week for a new episode of Panel Discussions featuring Josh Elder and Thrillbent's John Rogers.

Reading With Pictures' Josh Elder on The Graphic Textbook