It's been a busy week in the ol' comics industry, with Charles M. Schulz's Peanuts coming back from the grave, the Top Cow Universe being reborn from the brink and Marvel continuing to support their new best-selling monthly with pervasive and sometimes inscrutable marketing catchphrases. What did we think of these and other comics released on January 4th? Read on... 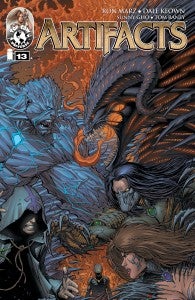 Artifacts #13 (Top Cow) This is the moment where the Top Cow Universe is (literally) reborn, and it'll be an issue that generates a lot of buzz and a lot of controversy among Top Cow fans. Particularly as it relates to Sara Pezzini, the bearer of The Witchblade and mother of Hope, who finds herself almost immediately willing to sacrifice her baby for the common good. The baby's father (Jackie "The Darkness" Estacado), as it happens, is on hand for the decision-making process and sparks fly. The end result is a comic which rebuilds the Top Cow Universe essentially as it was, but with some key changes for its major players that promise to make Witchblade a much darker book in the year to come and, ironically, promise a brighter future for The Darkness. It's a great-looking book, in which artist Dale Keown really hits every page out of the park, and it leaves as many questions unresolved as it answers. That works out well, of course, since it was not long ago announced that this once-limited series has now been granted ongoing status. New readers will find it a difficult jumping-on point, although the new status quo it sets up for Witchblade, The Darkness and Artifacts should mean that the January or February issues of those titles will be a great place for new fans to become acquainted. 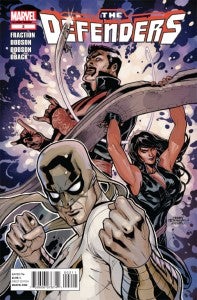 Defenders #2 (Marvel) While it's really difficult to imagine a better artistic fit for Silver Surfer than the Dodsons, Defenders #2 wasn't quite as smart, quite as much fun, or quite as "special" as the first issue was. The gimmick of having teasers, tags and ads for Marvel's other books--something that felt reminiscent of the clever "Rip Hunter's blackboard" gimmick from DC's 52 and Booster Gold series, is feeling stale already, in no small part because it's still just plain text and obvious ad copy at the bottom of every story page. Do something like that once, it's cool and different. Make it an ongoing thing and you have to start worrying about the reading experience of the actual story that people are there to read. "Anyone read this in print yet?" Asked one reader who used ComiXology's social networking links to share the book on Facebook. "I read it digitally and on the bottom of every page there was 1 sentence promoting other Marvel upcoming books/storylines. I found it annoyingly distracting and it ruined my reading experience." The characterization is great in this book, though, and it's easy to see its appeal. Marvel's version of the Justice League International, it features cool, underrated characters thrown together to give them a place to shine in spite of the fact that most or all of them couldn't support their own monthly. We get great moments from almost every character this month, with the actual superhero A-plot's only real weakness being its villains; even though they're convincingly written and a credible threat, it's hard to get excited about The Warriors of Wundagore - a group of dudes who look like vikings and talking animals. It reeks of Silver Age nostalgia, and not in a good way. All that said, the characters have a certain mythical quality that'd be more at home in the pages of Thor or Demon Knights--and may even make sense in context once this title has had a little more time to build a tone for itself beyond washed-out colors and underappreciated powerhouses. 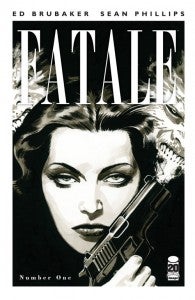 Fatale #1 (Image Comics) Ed Brubaker and Sean Phillips bring their unique, creator-owned storytelling style to Image Comics with a sold-out first issue this week. They tell a story that is on the face of it just another seedy story of the criminal subculture but which hints at something larger not only within its pages, but with the cover, promo art and an article included in the sold-out hard copy (not available digitally) that delves into H.P. Lovecraft. This creative team is virtually without equal in mainstream comics today, and this is the most exciting first issue they've had together in years. The nature of truth and fiction is played with a lot here, following the death of a commercially-popular but personally-friendless mystery author whose executor is our hero. He meets a beautiful woman just after the funeral who claims that her grandmother had a relationship with the deceased, but when an unpublished manuscript turns up in the old man's things, not only does the femme fatale's story come into question but the lines between Brubaker's story and the mystery novel being read inside of it start to blur as well. It's a device that could easily have brought the whole house crashing down in the hands of a lesser creative team but Brubaker and Phillips are some of the best in the business and rather than confusing, the strange storytelling device seems ambitious here, and seems to promise a truly worthwhile payoff in future issues. 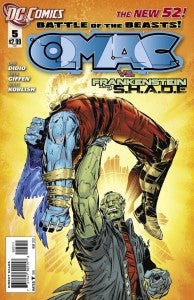 O.M.A.C. #5 (DC Comics) One of DC's most under-appreciated new titles, O.M.A.C. suffers from the distinction of being written by Dan DiDio. DiDio is the fans' favorite punching bag, after all; anything fans don't like gets pinned on him and credit for things they do tends to go to Geoff Johns and Jim Lee. That said, O.M.A.C. has been consistently entertaining, cleverly written and expertly drawn by Keith Giffen channeling the genius of O.M.A.C.'s creator Jack Kirby more successfully than almost any of The King's army of imitators. In spite of numerous cameos--particularly by members of the Justice League in just about any DC title that was interested in having them--taking place during the first four months of the New 52, though, it's O.M.A.C. and ComicBook.com's choice for the best book of 2011, Frankenstein, Agent of S.H.A.D.E., which get the first official crossover of the new DC Universe as DiDio, Giffen and Frankenstein writer Jeff Lemire team up to take on this two-part story in which Cadmus asks S.H.A.D.E.'s ugliest operative (and trust me, it's not a close contest) for help in bringing in the renegade O.M.A.C. The art style of the pair is a good fit, the creators have handled Lemire's unique voice for both Frankenstein and S.H.A.D.E.Net expertly and (as is rarely the case) the O.M.A.C. writers let their own characters (especially Max Lord) get trash-talked even in their own pages with very little in the way of rebuttal. All of this, coupled with a terrific-looking two-page spread that features arguably the best "Editor's Note" of the New 52, makes the New DC Universe's first true crossover something to be savored. The second half hits in two weeks, when we'll see how ambitious the story gets and to what extent the inter-agency squabbling Jeff Lemire hinted at last year in a Panel Discussions interview will become a focus.

Peanuts #1 (Kaboom) A little fractured (by design and format), this issue is nonetheless tied together by a few themes. Music runs through the comic like a Terry Moore book, and Lucy's tyranny here is more pronounced and pervasive than I remember it being at least during my childhood in the 1980s. These lend a sense of cohesion to what would otherwise be essentially a (very short) anthology book. That said, it's still basically a collection of strips, even if some of the strips go on for pages. This is a terrific kids' read, with both the visual style and the characterization staying strong and familiar throughout in spite of a number of creative teams in a way that's somewhat reminiscent of Bongo Comics's  Futurama and The Simpsons comics. 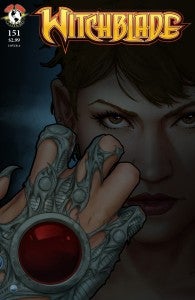 Witchblade #151 (Top Cow) With Hack/Slash creator Tim Seeley taking over the title this month after seventy issues with Artifacts writer Ron Marz at the helm, some things were of course going to change—but following the events of Artifacts #13, the status quo in this book is not just different, but the character herself is fundamentally altered in a lot of ways. Not just darker, as alluded to above, the character is also shallower and more stereotypically female here than she has been during the Marz run, with a LOT of talk about appearance. That's predictable enough, I suppose, given that Seeley had specifically said in a recent Champion! Magazine interview that he planned to bring some sexy back to the title. The fact that this is a somewhat different Sara from the one we all know also eases the transition somewhat, although if this were a New 52 title with all the gender-role scrutiny they've been facing, it's likely Seeley would be getting strung up in the town square for Sara's observation that even with all the power of the Witchblade, she can't escape crow's feet. Looking beyond characterization, though, the plot itself has a lot of promise. Battling against a woman in what looks like a less bony, more meaty version of her own costume that apparently feeds on organic matter like a rot, Sara finds herself first investigating the death of a man who was alive one minute and four days dead the next, then accused of a murder where something similar happened and she was on the wrong side of the investigator/investigated relationship.