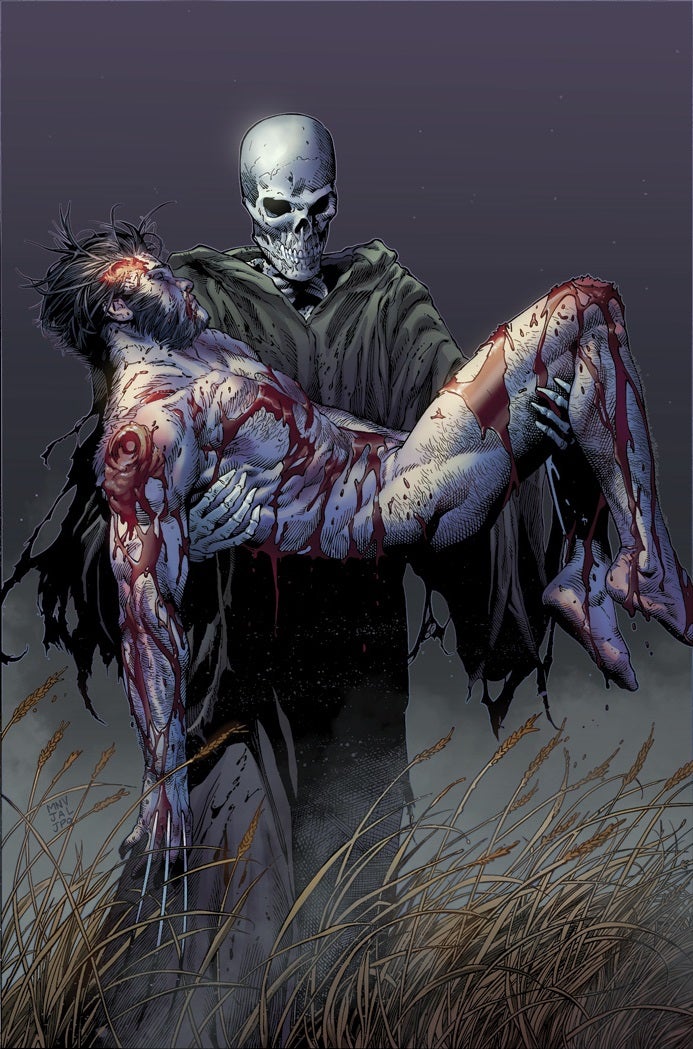 I can honestly say that The Death of Wolverine is an entertaining mini-series. Steve McNiven has beautifully rendered all four issues and the various beats of Charles Soule's story have been amusing, if nothing else. At its conclusion, I found myself laughing with a big smile on my face. I doubt that was the intent, but it is a positive quality nonetheless.

The small delays in the weekly series have been worth the wait, as McNiven has managed to maintain the quality of his work with the extra time. His art in the final issue is consistent with the first, second, and third. Although the story is lacking in the scenic landscapes and colorful villains of earlier installments, McNiven still discovers opportunities to show off his style. The violence that fills these pages is as dirty and overblown as any he has portrayed before. McNiven plays the ridiculous fights straight so that it's possible to enjoy them for what they are: ultra violence.

There's also a brief montage close to the end of the issue highlighting Wolverine's life. The sequence reflects a life literally flashing before the reader's eyes. Each moment is picked for maximum nostalgia and iconic appeal that will appeal to even casual fans of Wolverine. It's a cliché, but with McNiven's pencils and without the context of the surrounding panels it works. The problem is that the context that surrounds this sequence alters the tone from one of melodrama to comedy.

It's impossible to discuss why the conclusion of this series falls apart without spoilers. Obviously Wolverine dies, but the manner in which he dies is hilarious. If you don't want to read any spoilers, stop here.

Wolverine dies by being covered in molten adamantium and forming into a statue of while watching the sunset (even though his face is entirely covered in liquid metal). That sentence is patently silly and it is the most serious representation of the conclusion that I can conjure. It's a histrionic conclusion, so much so that it plays like a joke. Soule plays the ending entirely straight though and it makes for a jarring experience. The moment and manner of death is so overblown that it feels ridiculous in conjunction with the heartfelt memories and poetic final thought.

The events of the final issue essentially exist within a vacuum as well. Very little from the previous three issues is pertinent to what happens here. The villain and conflict are all introduced at the beginning of this issue. Excluding a few minor details, this series could have been transformed into a one-shot. It also leaves Wolverine's final actions feeling rather unimportant. He saves a few random people who have no emotional connection with the audience and kills a foe who is unthreatening and unrecognizable. There's very little reason to care about what happens in this issue when readers only know one character and his actions all exist in relation to a group of unknowns.

The Death of Wolverine is one of the better event series to be released in the past few years. It may not succeed in its intended purpose, but it is enjoyable and (relatively) succinct. It's a cut above most event series, managing to be entertaining without ever becoming aggravating.

REVIEW: The Death of Wolverine #4