Before our review, a detour.

It's been about 15 years since director Bryan Singer changed the nature and perception of comic book movies with X-Men, crafting a summer blockbuster franchise from a property that didn't have the kind of built-in mainstream awareness of Batman or Spider-Man.

The film embraced comic book conventions in a way that few films before it had done, and managed to do so without descending into camp, as the Joel Schumacher Batman films had done just a couple of years before. When X-Men hit theaters in 2000, many critics and audiences had written off superheroes as a fad whose time had passed. Superman's movies went to pot after the second installment, and then Batman's did the same. Marvel's biggest success had been with Blade, a film that didn't really even acknowledge its comic book roots and embraced the conventions or horror films more than the high adventure of superheroics (and which also went to pot after two installments, but that hadn't happened yet). 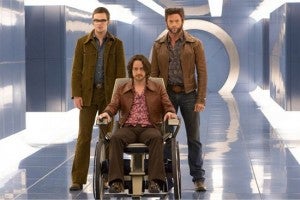 Since 2000, the comic book movie has been one of the dominant creative and financial forces in the film industry. From indies like Ghost World, Sin City and Blue is the Warmest Colour to massive, commercial hits like The Dark Knight and The Avengers, there have been comic book movies in development at every studio more or less nonstop for more than a decade now. And while some of that was inevitable and much of it may have happened anyway once Sam Raimi's Spider-Man films Christopher Nolan's Batman franchise came along to reinvigorate the genre, it's hard to ignore the impact that Singer's X-Men films had.

In many ways, X-Men and X2: X-Men United were more a blueprint for a successful comic book film than were Nolan's or Raimi's movies. From an aesthetic standpoint, the Marvel Studios movies have often looked more like Singer's films than either of those two franchises, which arguably are the extremes of the genre. Singer embraced snark and comic relief without the camp of Spider-Man and started the trend of bringing superheroes closer to the "real world" by downplaying the brightly-colored costumes in favor of the kind of practical fashions that would eventually dominate the Dark Knight movies and even most of the non-headlining superheroes in the Marvel Cinematic Universe (Hawkeye, Quicksilver and Scarlet Witch, for instance, look more like extras from X2 than anything from the comic book source material, and in an effort to make villains more menacing almost every comic book movie has followed that pattern with the bad guys).

In spite of many shortcomings, X-Men and X2 raised the bar for comic book movies and their impact is still being felt today. Subsequent X-Men films haven't nearly managed to meeet that bar, and certainly neither did Singer's attempt at another superhero franchise with Superman Returns.

(Here's where we catch back up with our review.)

That all changed this weekend. 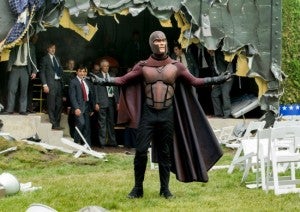 X-Men: Days of Future Past is a remarkable achievement. It's a smart, complex movie that features superheroes -- and not one fairly realistic, easily digestible superhero like the Dark Knight Trilogy. This is, like many of the X-Men films, a movie that's littered with characters, references, cameos and teases. Like the season finale of Arrow, just about every face in the movie seemed familiar, and that's before Richard Nixon is counted.

The sheer mechanics of this movie are unbelievably complex, but somehow the film manages not to collapse under its own weight, which is the first sign that we were in for something special.

When it was announced that all of the previous X-Men would be on the table, from 2000 all the way up through The Wolverine, there was a sense that the film would go one of two ways: it would one-up The Avengers by balancing the characters and plot cleverly enough to justify that gimmick, or it would be a massive waste of a lot of talent and fans would spend the next few years complaining about all the missed opportunities in the film, as they've done with previous X-Men installments.

And, yes, there were a lot of mutants who were seemingly there just to...be there, but even those were used more effectively than they have been in the past. No character gets a short shrift in this movie, and even those whose appearances in the movie are glorified cameos each get at least one cool beat. If there's anything Singer seems to have learned from his previous cinematic mistakes, it's that. There will be those who grumble that their favorite character is underutilized and unless that character is one of the half-dozen at the core of the time-travel story, an argument could be made those people are right. This movie, though, is an elaborate jigsaw puzzle that demands and justifies most of the characters' appearances in a way that X2 and X-Men: The Last Stand never bothered to do.

The movie also sidesteps the key problem that so many superhero team films suffer from, which is that it seems there are no stakes and the threat isn't particularly compelling. In Days of Future Past, the dismal, fatalistic future from which Wolverine travels back is terrifying and each step along the way, every bad decision can lead to that world or some other bleak variation on it. This isn't the alien invasion from The Avengers, where the only thing telling you there's any danger is all the buildings crumbling around the characters (although there is some of that in this movie, but surprisingly little collateral damage to civilian areas). Between the mind-bending nature of time travel and three of the six lead characters working at odds with one another, there's a sense at any given moment that something could go terribly wrong. That the sequel stars the First Class group but so much of your time and energy is invested in Singer's original generation of X-Men raises the stakes again because now you've got an entire group of beloved characters ready to blink off the screen and never be seen or heard from again.

If there's a weakness to the plot, it lies in what is unambiguously one of the movie's bigger strengths: Quicksilver. The character's speed is depicted brilliantly, both from a cinematic and story point of view. In their haste to make him necessary to the plot, though, they revealed one of the fatal flaws of having a speedster in a setting like this: he seems unbeatable. During the whole time he's onscreen, neither he nor anyone he wants to protect ever feel particularly like they're in danger and, while he's called in early on by Wolverine who says he "knows a guy" for a seemingly-impossible mission, the fact that they don't keep him around when things are really ugly and lives are on the line seems like a strange choice becuase he frankly comes off as so powerful and useful. Like muting Xavier's powers for much of the movie, though, this can be forgiven; certain characters aren't suited to being front-line fighters because their powers so dwarf those of all the other characters.

The central conflict between Xavier and Magneto is the major thematic thrust of most good X-Men stories, and that's certainly true here. We see, in the course of this film, events that will make Professor X the leader the X-Men need and all the while, our heroes are striving against Trask, bent on constructing what he doesn't realize is a future so terrible that it's easy to forgive Magneto for callously turning a gun on one of the other main characters in order to prevent it from happening. The characters are human and fallible, but they're doing what they believe is best, which makes Magneto (and to a lesser extent Bolivar Trask, about which the same can be said) a compelling antagonist and which allows the cat-and-mouse that the Magneto and Professor X have been engaged in for fifty years seem a touch less absurd.

And then, there's time travel.

Time travel has been known to ruin countless stories across all kinds of media. It's nearly impossible to get right and virtually no version of time travel holds up to scrutiny. The trick is to set your rules and your philosophy, live by them and don't slow down enough that the audience gets bored and thinks about the mechanics of it. Days of Future Past does this ably, and the result is that for the first time in a superhero film, some of the wildly implausible science we take for granted in superhero comics seems to come alive.

When your film's biggest problem is that James McAvoy and Jennifer Lawrence get a bit hammy from time to time, you know you're in pretty good shape.

Go see this film. Batman V Superman: Dawn of Justice and Avengers: Age of Ultron will have no choice but to take a long look at this movie and take notes. Writer Simon Kinberg, whose Fantastic Four reboot sounds like a disaster waiting to happen, suddenly seems like somebody you might trust with a comic book movie again. And at a time when outside factors make it difficult to root for him, Bryan Singer so nails this movie that he's changed the game again for future comic book adaptations, and from an artistic point of view, it's impossible not to sing his praises.

Every new comic book movie lately is "the best one ever." That's not a game I'm keen to play. X-Men: Days of Future Past is an astounding film, though; its cleverness is met by its ambition and its stakes are matched by its heart. It's certainly one of the best films ever to be made with superheroes, which is different from being "the best comic book movie."

Each viewer brings their own standard s, their own likes and dislikes, their own expectations and baggage to the table. In my case, films that have character development, emotional honesty and character depth are valued higher than shallow, effective adventure films that are "just fun." Days of Future Past manages to do a bit of both, but enough of the former that I can't wait to watch it again. That's a feeling I rarely get from these films, which often seem almost procedural in nature, moving from one action set piece to the next. Those kinds of movies are, I've said before, cinematic Chinese take-out. They're delightful in the moment but an hour later, you've forgotten they were ever there. This film feels like one that will linger with me, and likely in the culture and consciousness of Hollywood and those who make superhero films.

Review: X-Men: Days of Future Past Should Change the Face of Comic Book Movies For the Better