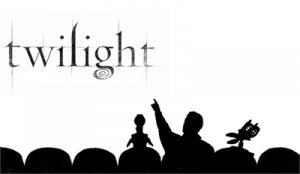 RiffTrax, the movie-mocking crew made up of Mystery Science Theater 3000 veterans Mike Nelson, Kevin Murphy and Bill Corbett, plans to take their Rifftrax Live theatrical program to the next step in August with a live "riff" of Twilight.

Recently voted the worst movie of all time, Twilight is newer, more popular and more costly than any of the films RiffTrax has previously done in theaters, which include Manos, The Hands of Fate and Plan 9 From Outer Space. So, before they even began the process, the RiffTrax crew took to Kickstarter to raise the $55,000 they estimate will be needed to acquire the rights to screen and broadcast Twilight for a one-night-only event this summer.

You can check out their trailer/fundraising video below.

RiffTrax Plan to Mock Twilight Live at a Theater Near You

How Making Cherry Compared to Marvel Work For Russo Brothers