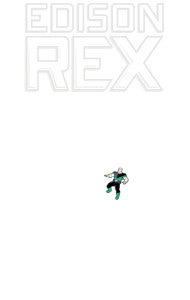 Last week saw the release of Edison Rex #9--the series' most surreal issue yet. While some critics have pegged Edison Rex in general as being a kind of continuation of Bronze Age Superman stories and a commentary on the modern age of comics, writer Chris Roberson and artist Dennis Culver made that explicit this time out, with an impish talking puppet of a villain that drew Edison out of his ongoing story for an issue to deal with Mr. Mxyzptlk/Bat-Mite-style mischief. Roberson and Culver joined us to discuss the issue, which you can buy here if you haven't read it yet. ComicBook.com: First of all, I'll say that you really managed to lump every post-Crisis era of Superman into one big parody in those first few pages, huh? You got the chubby, cigar-smoking corporate villain, you've got the long hair, and the New 52 armor. Chris Roberson: It's actually less a specific parody of any particular character or era, and more a response to the kinds of superhero comics that have come to dominate in the last 20 years or so. I think in my head Edison Rex's world is one in which the Bronze Age never stopped, but just kept evolving. As if you took the trends in superhero comics that prevailed when I first became an obsessive fan in the late 70s and early 80s, and then continuing rolling those trends forward. Dennis Culver: I'm coming from the generation right after Chris so I don't have the same connection to the Bronze Age but my intent was to poke a bit of fun at the hyper realism trend in Superhero comics. Mad Scientists and seamless costumes may not be realistic but if you hold the genre to that standard then none of it measures up. For my money the way you make any story realistic is through honest character driven moments. That's something we all understand regardless of genre. Put another way I think Aquaman can have just as much emotional resonance fighting a Gorilla in a submarine as he can fighting Somali pirates. One just happens to be more fun for me than the other. 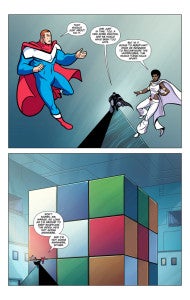 Did you intentionally write this issue in a way that would play a little bit at the edges of the "Infinite Comics"-style reading experience? With all the white backgrounds and the interplay between Rex and ROFL, it felt a little like simple animation when I was going through it. Roberson: Yes, it's something that Dennis and I have talked about for a while. We've pulled back a few times from doing funky coloring effects or weird transitions, because they didn't fit the tone of the stories we were doing. But almost every time, one or the other of us would say, "But you KNOW, that COULD work in the ROFL story…" My immediate inspiration for suggesting the white backgrounds was Chuck Jones's classic "Duck Amuck," and thinking about ways that you could accomplish similar effects in digital comics. Culver: I don't think I would enjoy doing Infinite Comics in an ongoing capacity but I think it's a neat tool to have in the toolbox when appropriate. ComicBook.com:  Is there script copy for what they're saying in Japanese during the Manga sequence anywhere? Roberson: Actually, yes! They are: "Is something wrong, Admiral?" "We are prepared to begin the bombing on your orders." "My calculations indicate a 92.7% chance of success." "Intruder!" "Attack!" Dennis was the one who suggested that this sequence be manga style and that the dialogue should be in Japanese. (I think my original idea was something more Star Trek, which isn't a million miles from what we ended up with, but Dennis's idea was MUCH better.) I put out a call on Twitter asking for translation assist, and a very generous guy named Brian Clark offered to help out. I think it adds SO much to those pages, too. ComicBook.com: Dennis, how much fun was it to get to play with the variety of different styles? I feel like I'd have to pinch myself if someone told me I was going to get paid for that Liefeld sequence. Culver: It was a lot of fun but also a lot of work. That extreme style is harder than it looks! I think it was a good tool to visually show changes to Rex's universe. Not easily pulled off in other mediums! 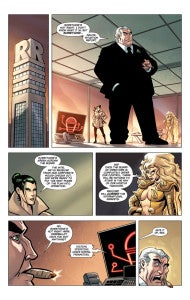 Do you think it's safe to say that ROFL is the most obvious homage character we've seen in the series? I mean, you've got elements of a number of heroes and villains inside of Valiant and Edison,for example, but Mxyzptlk is pretty hard to miss here. Roberson: Well, back in the olden days, it seemed like almost every superhero had a "mischievous imp" who would pop up from time to time and make life difficult. (And exaggeration, of course, but not much.) There was Myxyzptlk, sure, and Bat-Mite obviously, but also Zook, Quisp, and even later examples like Krakkl. Each of them worked in different ways, though, whether as menace or nuisance or sidekick. I thought it would be fun to take that basic framework and approach it from a different direction, and ROFL was the result. (My original notes had him named "Rumpelstiltskin," but Dennis came up with ROFL, which is perfect.) Culver: The magical/surreal in-the-know trickster is an important character type. He can provide comic relief like The Impossible Man in FF or have deeper meaning like Bat-Mite in R.I.P. ComicBook.com: What's attractive about working with a character like that? Do you think it's the same kind of kick guys get out of working with Deadpool, in a way? Roberson: I think there's a lot of appeal to playing with a character who is aware of the laws and genre conventions of the fictional world they inhabit. Culver: I think the main appeal is characters like this are visually driven and work best in comics. Sometimes you need something that allows you to break the rules of your fictional universe. We have some big plans for ROFL. He's one to watch. 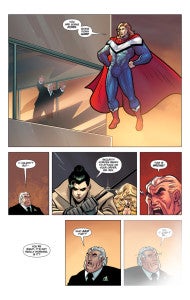 Speaking of which--this is a pretty genre-savvy issue. Did either of you have concerns butting up against the "I'm in a comic book" thing? Roberson: Nah. Because, hey, he IS in a comic! Culver: I think we nailed it as far as tone. My only limit was breaking the fourth wall which I think would have pushed it too far. ComicBook.com: Whose idea was it to make ROFL a puppet? Roberson: That was me. So many of the older "imp" characters were made to look like comic strip or animated cartoon characters, and it occurred to me that those were visual references grounded in the 1930s. Characters that could break the fourth wall, bend the rules for comedic effect, comment on the characters as much from the viewer's perspective as anyone in their fictional world. And it occurred to me that the Muppets filled a lot of that same role in TV and film starting in the sixties and onwards. So maybe it would be fun to do an imp who was a puppet. (And for any fellow Muppet fanatics out there, I was specifically thinking of the Large Lavender Livehand "Anything Muppet". ComicBook.com: How many iterations of the puppet did you guys have to go through before you found the perfect one? Roberson: I think I was at Matt Wagner's house when Dennis emailed me a sketch of ROFL, and I almost dropped my phone laughing. Dennis, was that your first take, or were there others? 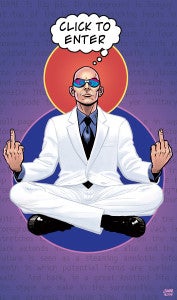 Once Chris sent me the above link I had a clear visual of a Muppet Grant Morrison and based the design on the outfit worn in this Cameron Stewart drawing: Roberson: Which is another good example of how our collaboration works. I was just thinking "puppet" as a visual gag, to contrast with the older "cartoon" imps. But as soon as Dennis came back with a design inspired by Morrison, that got me thinking about his notion of "fiction suits" and creators "descending" to the two dimensional worlds of their creations and interacting with them. And THAT lead to me suggesting that the reason that ROFL looks like a puppet is that he IS a puppet being manipulated by some higher dimensional consciousness. ComicBook.com: This is a classic example of the REXFiles being full of useful information. The melancholy that Edison has...what are the odds we'll be seeing some version of Valiant in the time between now and when ROFL returns? Roberson: All I can say is, KEEP READING! Culver: I'll just say what I said last time in regards to future issues: Actions have consequences. ComicBook.com: How do you plan to unfold that time? Will it be a calendar year for us as well, or will it be comic book time? Roberson: Probably somewhere in between. We've got a rough outline that covers the next few calendar years' worth of stories, and we know what point in the future ROFL was looking at. Culver: It's a really good moment and I can't wait until we unveil what ROFL was looking at but getting there is a good story to tell too. It might not be exactly 12 issues but close!