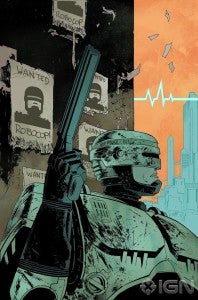 The previously-teased RoboCop project by Frank Miller, Steven Grant and Korkut Öztekin has been more fully revealed; the story, titled RoboCop: The Last Stand, is based on the RoboCop 3 screenplay by Miller, which saw substantial alteration before it was produced. Declan Shalvey will draw the covers, two of which are shown here. Check out the solicitation information:

FRANK MILLER'S VISION FOR ROBOCOP'S FINAL CHAPTER REVEALED! Frank Miller's incredible screenplay has been brought to life in this hard-hitting Steven Grant (2 GUNS, PUNISHER: CIRCLE OF BLOOD) penned adaptation. With all the brains, guts, and bullets that made the first film an instant classic, this is a comic event not to miss. The police force has disbanded. The people of Detroit have been evicted from their homes. ED-209s and OCP officers run the streets. With OCP's vision for Delta City well underway, Robocop may be his city's last hope. This is Robocop's last stand, as it was always intended to be. 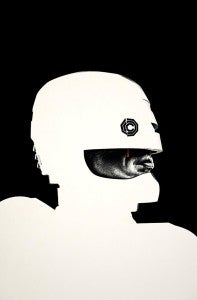 "Robocop's long history in comics is an indicator of how beloved the franchise is among comic book fans," BOOM! VP of publishing and marketing Filip Sablik told Newsarama. "Internally at BOOM! we're all big fans of the original fillm, as well as of the various comics that have come out from Dark Horse, Avatar, and Dynamite over the years, so when the opportunity came up to work with MGM on building the next stage of Robocop's story in comics, we felt we could add something meaningful to it."