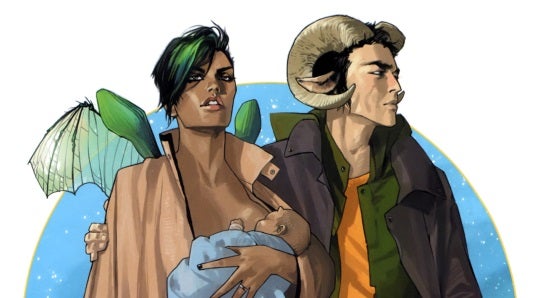 Image Comics's Saga by Brian K. Vaughan and Fiona Staples was nominated for a pair of Hugo Awards on Sunday. Announced at the British National Science Fiction Convention in Glasgow, the nominations include one for Saga Volume Two in the Best Graphic Story category and for Staples in the Best Professional Artist category. Saga previously won the Best Graphic Story Hugo Award in 2013. "I've been an avid reader of Hugo-nominated works since grade school, so this is a ridiculous honor for our book," said Vaughan, co-creator of Y: The Last Man and head writer of CBS's Under the Dome. "And it's especially cool to see co-creator Fiona Staples recognized as one of the finest artists of a genre we both love." Saga tells the story of two star-crossed lovers from opposite sides of a generations-long interplanetary war. Jetting across the galaxy with their baby daughter Hazel, Marko and Alana flee from their own governments and bounty hunters sent to hunt them down, encountering aliens who are friends and foes alike. The Hugo Awards have recognized excellence in the science fiction and fantasy genres since 1955. The winners are voted on by members of the World Science Fiction Society. The awards will be presented in a ceremony at the World Science Fiction Convention (Worldcon), to be held this year in London on August 17.