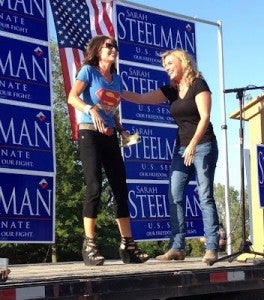 Remember how earlier tonight, ComicBook.com reported on President Barack Obama's enjoyment of The Dark Knight Rises, and in particular of Anne Hathaway's Catwoman. Well, apparently the identity of the true World's Finest hero is something that divides along party lines. Former U.S. Vice Presidential candidate and reality TV star Sarah Palin appeared today (and apparently a number of times recently at a rally for Sarah Steelman, wearing a skintight Superman t-shirt that played on the candidate's name. Palin appeared in Kansas City to campaign for Steelman, who's in a close Republican primary for Missouri's U.S. Senate seat. The winner will face Democrat Claire McCaskill in November's general election. The Steelman Surge BBQ and Picnic featured speeches by Steelman and Palin, and then the two women served barbecue to a crowd of around 500. Photo courtesy The Mudflats' Facebook page.