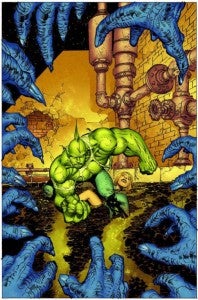 The war continues this week's Savage Dragon #180--and while things are starting to look up for the combatants here on Earth, there's a dramatic shift coming in space where Dragon's turn for the more merciless has alienated him from his people and sees him set to square off in a deathmatch against his son for control of the Krylan ship.

This week, Savage Dragon superfan Gavin Higginbotham wrote all of the questions, so without further ado, we'll let him get to it!

We open this issue with the familiar four pages we've seen in issues 0, 167 and 175. It's interesting that although we've seen this same scene four times, each time we've had different scenarios (and often different characters for each one-Kurr, Krull and Dragon twice).

Is this mainly a tool to set the scene quickly for the readers? A time saver in terms of layouts?

It serves a few purposes and the main one is to have a familiar place to deviate from. A reader knows where this is going--or thinks they do--and I can use that as a jumping off point.

In this instance, it seems to be a perfect device to show that although Dragon is very different from the evil Kurr, they're not completely different.

Exactly. And had I drawn it all in an unfamiliar way it would not have gotten that, necessarily.

Malcolm does the gentlemanly thing and turns down Angel's innocent proposal. Malcolm has gone through a whole mess of crap in his young life. He seems to have inherited his father's calm under fire, something Angel is lacking here.

They're opposite sides of a coin at this point. He's half full, she's half empty. He feels as though he can save the day and is confident a solution can be found. She's not convinced. Both have been through a lot.

It's funny how fearless Angel was as a child. Now that she's fully aware of what the dangers are she faces, she's grown and changed. Fascinating.

Betty Bradford seems to be getting the hang of being Mighty Man despite her lack of experience and very young age.

She's really just flailing around. It's not that she's a great fighter--it's that she's incredibly powerful.

So Thor is still blinded? Yet is still kicking ass? That guy is a touch mother--

The gods have largely been unmolested throughout their existence in the book. It looks like it's time for their turn to suffer some casualties, eh?

Just how badass is the Overlord armor? We get to see TONS of dead villains here but Overlord is still blasting away. Does the armor have limits to its firepower and battery life? It seems to keep on going!

It's pretty badass. It's not without limits, to be sure, but thus far there's not been a time when it has run out of power.

No background character Jon Day this issue. Has he suffered a final death at the aliens' hands or can we count on his return before long?

We'll see. Jon has that amazing ability to bounce back from damned near everything.

Mako has killed off another King of Atlantis. Will he be sticking around underwater? He seems to have had enough with the surface world so this could be the perfect retirement plan!

I don't want to give too much away but--yeah--if things came to that point--Mako has options.

We've not truly seen Atlantis for a hundred issues now, will we be seeing more of it now?

There are a lot of things to touch on. I'll get around to all of it.

Some more guest stars here! Madman has a history in the book and youve recently taken over and relaunching Supreme, so these guys make sense. Any particular reason for Ant and new Image hero Mudman? Just like the characters and visuals?

Part of the tapestry that is the Image Universe. I had Spawn, WitchBlade, Invincible and Shadowhawk last time out and I wanted to touch on different parts of the Image universe. And yeah, Ant is a great visual. One of the most iconic female characters in comics.

SuperPatriot is the coolest, right? 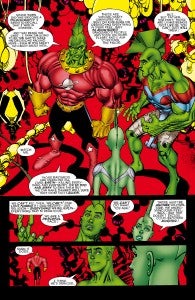 It seems the S.O.S. have been completely wiped out now. Is this the end of the team or are you merely clearing the decks for a new line-up?

The latter. The team will be rebuilt. There will be a lot of familiar faces in there.

I guess Rex built himself a new penis? Ha!

Don't f--- with God! AllGod that is! So the gods' boss saved the day after a call from Rex and humans killed him... I'm guessing the Gods are going to be pretty pissed about this.

It was still the act the act of one trigger happy soldier. It could go any number of ways. I'm just going to sit back and let this one sort itself out. I've done a few too many cast of thousands apocalyptic epics of late and I don't want to roll right into another if I can follow up with something else that works.

The surviving Tyrrus Combine flee the planet,'straight into Vanguard's crew. This ties in once more with the back-up story where Van and company attack the aliens. Is this the end of the Tyrraneans? Perhaps more importantly, did Wally really die?!

I don't think anything is ever over--not really. As for Wally--that's Gary's call.

And finally... Dragon kills off the Tyrraneans on Kalyptus with a move straight out of Kurr's playbook... leading to Dragon vs Krull next issue. Can Krull's youth possibly help him beat his dad? No offense to him but... The Krylans are a bunch of pussies!

He is, however, in his physical prime while Dragon is past his prime. It should be fun.