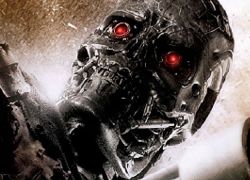 In a Q & A webcast with political blogger Bill Bradley, California governor, Arnold Schwarzenegger confirmed that he had agreed to participate in the upcoming film, Terminator: Salvation. In his interview, the former actor turned Governor said that he had met with the film’s director, McG, and agreed to participate in the film, as long as he did not have to perform. Huh?

With the current budget crisis facing California, Schwarzenegger told McG that he clearly did not have the time to both govern the most populous state in the U.S. and act in a big budget movie. At that point, the Governor basically gave McG permission to use his likeness from the previous 3 Terminator movies and incorporate them into the fourth installment in the Terminator series. “They would basically take technology out of Terminator I, and use that walk of mine and somehow bring it in. It's just a brief scene.” said Schwarzenegger.

The scene in question involves Christian Bale, who is playing an adult John Connor; humanity’s only hope to overthrow the evil computer warlord known as Skynet. In the scene, Connor catches a brief glimpse of a “future Terminator,” bearing Schwarzenegger’s face.

Whether the scene makes it into the film depends on how well the digital studios at Warner Bros. can digitally manipulate scenes from the original Terminator movie. Terminator: Salvation is due in theatres on May 21st, So fans should not be surprised if Warner decides to skip placing Schwarzenegger in the theatrical cut and instead decides to include the scene in any possible director’s cuts due to time and quality constraints.