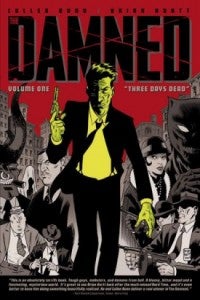 Showtime is developing a TV series around the Oni Press comic book 'The Damned.' The comic book was written by Cullen Bunn and Brian Hurtt. According to Deadline, the Showtime series will be written by David Hayter, the screenwriter behind the film adaptations of 'Watchmen,' 'X-Men,' and 'X2.' Some other companies that you really don't care about are producing. In case you're not familiar with 'The Damned,' the story centers around Eddie, a cursed man who finds himself in the middle of a mob/gang war during the prohibition era. And oh yeah, those gang members are demons. Eddie's curse is an interesting one, as he continually returns from the dead. After dying, the next person to touch him dies and Eddie takes that person's place. This is EXACTLY the type of adaptation we've been begging edgier networks like Showtime and HBO to take on as a series. There is a ton of depth in the story, and the character possibilities are endless. You want to pull in new audiences into comic books? This is definitely one way to do it. Put something on TV that the average Joe will watch, and continually pound it into his head that he's watching material from a comic book. Kudos to everyone involved on this project. Great, great move not only for an independent publisher, but also for comics as a whole.

Showtime Adapting 'The Damned' As a TV Series