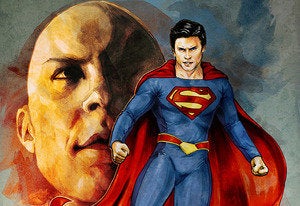 Bryan Q. Miller won't be leaving Smallville, even though the Smallville Season Eleven digital-first comics series will be coming to a close. According to Yahoo! TV, the series will turn into a series of individual miniseries, each one starting with a new #1 issue and a new story arc. This is, ironically, the opposite move taken by Amelia Cole, the creators of which felt that the "series of miniseries" format didn't suit a smaller title that fans may have a hard time finding since comiXology doesn't presently have a means to connect the disparate series. When reached via Twitter, comiXology Support confirmed that they haven't changed anything that would make it easier for Smallville. "The first 20-30 pages of each arc will be more about setting up the status quo for the miniseries, rather than jumping right into things," Miller said of the difference between the current and new Smallville approaches. "It's a way to help welcome more people into the Smallville universe that we've been expanding on since the television series ended." The first series, Smallville: Alien, will introduce Rocket Red and take place partially in Russia, as Lex Luthor and Superman race to recover a Monitor who has fallen from space warning of a coming Crisis. The next arc will introduce the Titans, made up of Conner Kent, Mia Dearden, Jaime Reyes and more. Miller will reportedly continue to write Smallville Special one-shots that take place between the main arcs.

Smallville Season Eleven to End, Give Way to a Series of Miniseries