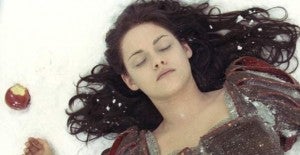 Just hours after The Hollywood Reporter suggested that Kristen Stewart was out in any considered sequel to her summer hit Snow White and the Huntsman, the Los Angeles Times reported that Universal Studios maintained the star might still reprise the role.

Rumors that director Rupert Sanders would return to direct a Chris Hemsworth-driven sequel that focused on The Huntsman weren't debunked by Universal, per se, but they did claim that Stewart might still play a role in the film.

Photographs surfaced last month of Stewart cheating on boyfriend and frequent co-star Robert Pattinson with Sanders. Both Stewart and Sanders issued public apologies, and it appears that Universal--who haven't yet declared any writer, director or story for the intended sequel--may be waiting to see whether the whole thing blows over, of where the public opinion lands, before making any decision which might be seen as "taking sides."

Stewart and Pattinson will next appear together in the forthcoming final chapter of their long-running Twilight series, which hits theaters in November. Expect the scandal to continue to play itself out in the entertainment press between now and then, with Lionsgate likely doing their best to either work around or incorporate it into promotion for the film.

Hemsworth is currently filming Thor: The Dark World in London and can be seen in an upcoming remake of Red Dawn--a film he finished shooting three years ago--when it hits theaters on November 2.

Snow White and the Huntsman grossed more than $150 million domestically and nearly $400 million worldwide on a $170 million budget. It will be released on home video September 11.

Snow White, The Huntsman, The Scandal and the Sequel