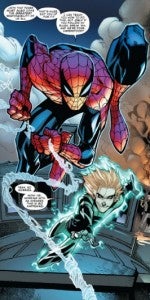 With the release today of Amazing Spider-Man #692, Spider-Man celebrates his fiftieth birthday in grand fashion, with a roster of A-list talent providing a trio of stories that would be enough to fill most single issues on their own. Since they're not all interconnected, and the lead feature by regular Amazing Spider-Man writer Dan Slott is the one that's charting a course for the next however-long in the title, it seemed like checking that one out first was as good a starting point for a review as possible--so here are some of our thoughts on Amazing Spider-Man: Alpha, which is almost certainly the chapter generating the most discussion this week. "He's no Peter Parker" is a great way of looking at this character, and it's one that's actually explicitly expressed in the text of the story. In spite of his origin story, and power levels, he's more Kick-Ass than Spider-Man, and the costume doesn't help much. It's also true that, barring something really radical happening in the next few issues, literally nobody will be talking about Alpha in fifty years. He's Magog to Spider-Man's Superman. If anything, he'll come up in conversations about what makes Peter so special, because he's essentially a carbon copy of the character, but without any of the important personality markers that make Peter more than just a wisecracking superhero. The whole thing feels a bit like a What If...? story, and the comments that Reed Richards makes about the (dead) Sentry and the (currently fighting the Marvel Universe) Phoenix Force kind of throws a spotlight on that in a big way. One wonders whether the Spider-Man titles, as yet untouched by the Marvel NOW! relaunch, may be existing in kind of a bubble of their own for the time being. The Fantastic Four connections in this book are interesting. Seeing Giganto--something that I can't ever remember having had happen to me while reading a comic--was kinda neat. Hearing Reed Richards preach that "there are some [scientific] genies you don't let out of the bottle" is a bit preposterous, given his record with that sort of thing. In recent years he's become much less the wisest man in the Marvel Universe and more like a scientific Rain Man with little or no understanding of the world outside the bubble of his lab, so hearing him say that kind of calls back to the old days. 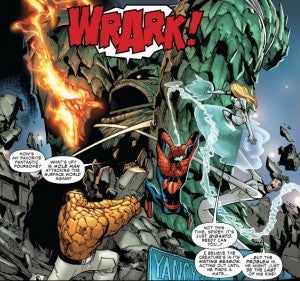 As someone who hasn't read Spider-Man comics consistently since One More Day and hasn't read a single issue since they killed off J. Jonah Jameson's wife, there are a lot of holes for me and it's probably harder for lapsed readers to come back to this issue than it is for new readers. Aunt May lives in Boston with a new boyfriend or husband? Mary Jane knows about Spider-Man and is kinda/sorta but not really back with Peter? Okay. Process and move on. Nothing really wrong with any of it, but it all came in the course of a couple of pages and it all struck me. Lastly, go pick this issue up at your local comic shop. it's $5.99, and so you want the best reading experience possible for your buck and digital is still not flawless. The guided view on ComiXology will take you through some of these pages (notably the two-page splashes) in a way that's not intuitive and on at least one occasion actually took me out of the story.

Spider-Man at 50: Reviewing Alpha By Dan Slott and Humberto Ramos