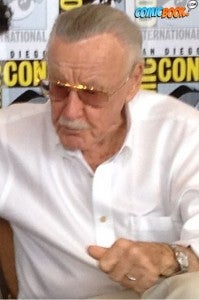 What a difference a week makes. Last week, everyone was freaking out that Stan Lee mysteriously canceled out on some upcoming appearances. Rumors floated that Stan Lee was gravely ill, and many in the press were pre-writing his obituary. This week, everyone (including Stan Lee himself) is joking about Stan Lee undergoing surgery to install a pacemaker.

When the appearance cancellations were announced, Stan Lee’s agent reportedly cited a very serious circumstance. However, Stan Lee’s Comikaze Expo reassured everyone that Stan Lee was fine and drinking a milkshake. Surprisingly, there was no official answer from Stan Lee himself, even though his Twitter account remained active.

This past Friday, Stan Lee finally addressed the controversy with a press release answer for those that were concerned. It turns out that the Generalissimo had a pacemaker installed. Getting a pacemaker is a relatively minor surgical procedure, but it’s still something that requires some recovery time, so it’s perfectly understandable why Stan Lee had to cancel out on some appearances. In fact, it’s surprising that this reason wasn’t revealed from the get-go, as most of the uproar over the mystery of his cancellations could have been avoided.

Still, fans are very relieved that Stan Lee should make a full recovery and be back on the convention circuit soon. In typical Stan Lee fashion, Stan Lee is already joking about his surgery. Here is a collection of pacemaker jokes from Stan “The Man” Lee.

In his official press release, Stan Lee said, “In an effort to be more like my fellow Avenger, Tony Stark, I have had an electronic pace-maker placed near my heart to insure that I’ll be able to lead thee for another 90 years.” Of course, everyone in the press is making the same comparison in their headlines on the story, but Stan Lee said it first and said it best himself.

After actor and comedian Seth Green tweeted, “Love you Robot-Stan!!! RT @TheRealStanLee https://ow.ly/e5Ltl  is recovering from having a pacemaker put in. He's a cyborg now!” Stan Lee tweeted back, “@SethGreen now I can be the star of your robotic chicken guy show.”

Always one to see the creative potential in everything, Comic Riffs reports that Stan Lee told them, “[I’m] busy working on my next superhero now: the Phantom Pacemaker!”