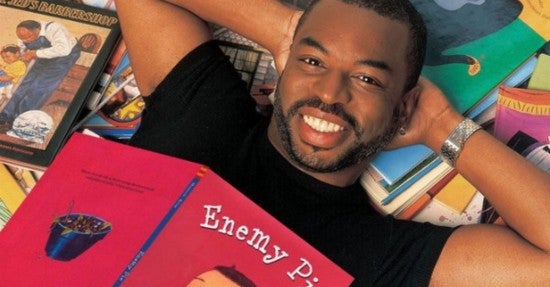 Star Trek: The Next Generation

star LeVar Burton launched a Kickstarter campaign to bring Reading Rainbow to low-income U.S. schools -- and he enlisted his Enterprise android pal Brent Spiner to do a quick cameo in the video that accompanies the campaign. The running joke of the video, by the way, is enriched if you've seen Burton's appearance on the recently-cancelled NBC sitcom Community. In the nearly 25 years it was on the air, Reading Rainbow was one of the most-awarded educational programs in television history. Its cancellation was chalked up, largely, to a change in the times. The show ran in reruns until 2009 and shortly after it was pulled from the schedule, Burton and RRKidz set about developing an iPad and Kindle app that would bring the show back to life for a more tech-savvy generation of children. The app, the best-selling iOS educational app, allows children to read unlimited books, explore video field trips starring Burton, and earn rewards for reading. It's been a big success and a moral victory for Burton, obviously, but he's concerned that about a quarter of American kids have no access to such technology -- which is not a barrier the show faced when it was on PBS. The Kickstarter is seeking US$1,000,000 to "bring Reading Rainbow's unlimited library of interactive books and video field trips to kids everywhere and help classrooms most in need." You can check out the video below. Burton and an episode of Reading Rainbow appear in director Zach Braff's Kickstarter-funded film, which was shot partially at San Diego Comic Con International last year and stars Braff, Kate Hudson, Jim Parsons, and James Avery. Among the rewards for the Reading Rainbow Kickstarter is a package of tickets and a meet-and-greet with Burton at Wizard World Chicago.

Star Trek: The Next Generation's LeVar Burton and Brent Spiner Team Up For Reading Rainbow

Spy x Family Cosplay Takes on a Mission With Twilight