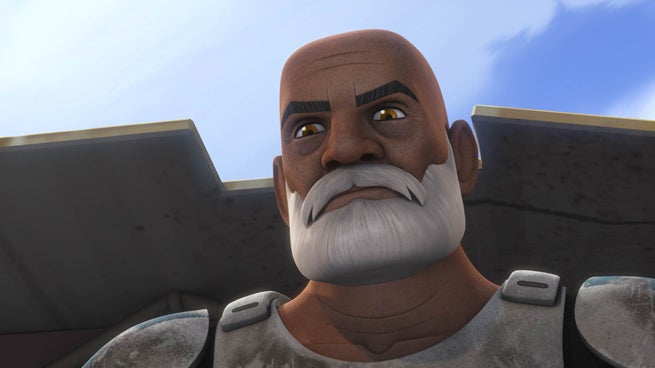 This Star Wars Day, we're spending all day with some of our favorite castmembers of Star Wars Rebels. We talk a bit about Season One, tease a bit more about Season Two, and find out about the next twists and turns on the way.

Dee Bradley Baker's voice is very well known to Star Wars fans. He was, after all, the voice of every single Clone on The Clone Wars, breathing unique life and personality into tens, if not hundreds, of genetically identical characters.

Now, it's time for Captain Rex and a few of his pals to join the cast of Rebels, as we find out what happens when a Clone Trooper gets old and fights back against the tyrannical Empire.

We spoke briefly with Dee about coming back to Rex and onto a new series at the red carpet for Star Wars Rebels Season Two.

Dee! Rex is back! And a couple of the other clones are back! What is that like for you emotionally, and what is it like logistically coming back into a role (or roles) like that?

Dee Bradley Baker: Well, emotionally, I mean, Ashley and I almost started – she was tearing up in the studio when I first came in there and she realized what was happening, because she didn't know that's what was happening! And I was very emotional coming out on stage today.

In terms of technically what to do, there are some adjustments in terms of making these Clones sound older. They also, let's see, how shall I put it? Their personalities have sharpened in certain ways, being of the age that they are.

So I had to veer from what I had already established in The Clone Wars to fit into a universe that – the Rebels universe, in some ways, is more energetic and moves a bit quicker. So there were some adjustments there, too.

Dave Filoni teased us that Kanan doesn't like Rex very much, at first, at least.

(laughs) Well how does Rex feel, seeing a Jedi all of a sudden again?

DBB: Well, Kanan is a stubborn fellow, and he's got a lot to learn. That's part of what makes him interesting as a Jedi. I'm trying to think of who to compare that to, and I don't really know who. But he's a Jedi who has some challenges in what he has to learn.

Rex has seen it all and has been through this. He doesn't have the Jedi superpowers, but he's got experience, you know? It always goes back to experience for Rex.

So, what forms is a relationship that is kind of a… I think Kanan has some things to learn that he can only learn from a non-Jedi, I'll put it that way.