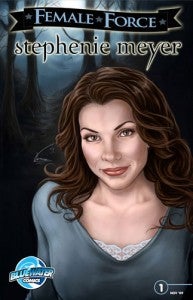 Bluewater Productions is at it again! The company that has brought you comic books based on the lives of Michelle Obama and other members of their Female Force line is back with a comic book based on Stephenie Meyer, the author of the runaway hit Twilight Saga book and now film series. Details of the comic are expected to focus on her early life and subsequent meteoric rise to fame as the author of the series, focusing on the complicated worlds of Bella and Edward, a teenage girl and a vampire. Bluewater president Darren G. Davis was enthusiastic about the project, saying that Meyer's story would be, "Very fun, respectful, and unique." The comic is scheduled to be released just in time for the sequel to the Twilight film titled New Moon, which is set for debut in late November of 2009. Meyer joins good company with Female Force, a series of books designed to look at the biographies of modern women who are having an impact on the culture and history of our world.

Stephenie Meyer Steps Through the Twilight in her own Comic Book!