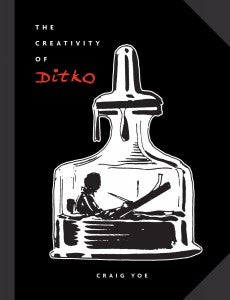 IDW Publishing announced today that it would be partnering with Yoe Books and Eisner Award-winner Craig Yoe to publish The Creativity of Steve Ditko, a 200-page hardcover book about the life and works of Spider-Man and Dr. Strange co-creator Steve Ditko, the controversial and elusive creator who has been both a staple of and somewhat alienated from the comics industry for years. Featuring what the publisher describes as "a myriad of unpublished art, sketches, and photos of the legendary creator," the book has been assembled lovingly by Yoe, who says it was Ditko who inspired him to get into comics in the first place. "Yoe Books' very first offering was The Art of Ditko," said Yoe, whom the press release identifies as one of the only people ever invited into Ditko's studio. "Over two years and many books ago, it was enthusiastically received. Now I've endeavored to make this our best book yet. I am thrilled with the über-creative comics we present here and the original art, much of it unpublished. And the nearly one dozen never published photos of the elusive artist make this a Ditko fan's dream come true. This is going to be a must-have but very controversial book! Bring it on!"

Steve Ditko Tribute to Be Published by Craig Yoe and IDW