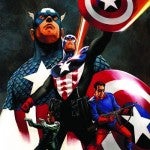 In a move that may surprise many, excite most and interest the curious, Marvel has made it clear that the focus of the Reborn miniseries will be the return of Steve Rogers to the universe he inhabited for over sixty years before his death just over two years ago at the conclusion of the Marvel Civil War. The team of writer Ed Brubaker and artist Bryan Hitch promise an exciting and emotional return for the star-spangled avenger, and with Captain America #600 in stores now, fans can go ahead and get their hands on some pretty intriguing details! Ed Brubaker explains, "This is a chance to really explore how things have changed in the years since Steve's death and really delve into who Steve Rogers is and why he became Captain America."

Steve Rogers is "Reborn" this Summer as Captain America!