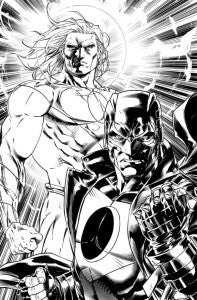 #30 will be the series' final issue, representing the last of the WildStorm titles to fall in the New 52. Previous WildStorm properties that have started and stopped over the last two years and change include Voodoo, Grifter, Team 7 and The Ravagers. Strangely, the most recognizable and valuable WildStorm properties--Gen 13 and WildC.A.T.S.--haven't yet been given a chance. It's possible one or both of those properties might get a chance at a new #1 in March or April; Stormwatch will end in April, but as yet we've only seen solicitation text up until February 2014. The news was slipped into a "New Artist Spotlight" posted Wednesday on DC's official site and featuring Jeremy Roberts, who will draw the final issue. Roberts was the winner of the publisher's "Open Talent Search" to find an artist to draw one page of Harley Quinn #0, released this week.