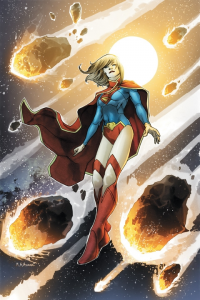 So far in the DC relaunch, the Superman family has been coming out with high grades on the first two "exams", Action Comics #1 and Superboy #1 respectively. The latest launch, Supergirl, hit the stands this week, and as promised, it's a bit of a different blonde battler in the role than readers may have seen before. In a world where it appears that people eye Superman with suspicion and where Superboy is a secret experimental project, it makes sense to have Supergirl be in similar company. As a whole, this Michael Green and Mike Johnson penned issue succeeds at establishing Supergirl's presence on Earth and in creating enough mystery to make readers curious for a second look. It's amazing at just how varied the perspectives have been so far in the new 52 in terms of how much introspection into the main character's mind we get in an opening issue. In Supergirl, almost the entire issue is her narration, so we get a chance to see her pure, unfiltered mind. This is a key piece, especially since she has just crash landed on Earth inside a meteor, near something called the "Kansas event" (hmmm... wonder who THAT could be). In this case though, the meteor goes through the Earth and winds up in Siberia, oddly enough. She emerges from the rubble, confused about what exactly happened and why she's wearing an outfit with a giant S on the chest. What follows then is a mostly well-paced narration of Supergirl trying to figure out what is real, what's not, what hurts and what doesn't. On hand to assist in this process are several highly-powered men in robotic suits, each trying to subdue the Kryptonian. Kara's powers kick in as the sun comes up, leading to some displays of power, obviously, for her, sort of frightening, and strange. The whole frenzied scene of her running and the men trying several pretty standard tricks to attempt to capture her is paced well enough. I did find myself asking questions such as, if they suspected this was a visitor like Superman, which seemed to be the case based on the conversation we hear after the landing, then why did the defenses and weapons they were using on her not seem stronger? A quibble, but one I couldn't help but notice. The story ends with a familiar figure flying in to put a stop to what's going on, which does make me curious as to how issue two will handle this new arrival and what her place will be. Green and Johnson do a good job of managing Supergirl's thoughts as she slowly tries to piece together just where she is and what she's doing, and Mahmud Asrar's drawings effectively capture Kara's bewilderment and wonder at her new surroundings. Grade: A-