Marvel Comics has announced that the recently-concluded series Superior Spider-Man will return in August for a two-issue story, picking up where its numbering left off and leading into the upcoming "Spider-Verse" event. Superior Spider-Man #32 and #33 are scheduled for August and September from writers Dan Slott and his frequent collaborator Christos Gage, with art from Giuseppe Camuncoli (illustrating issue #32) and Adam Kubert (#33). "There's time travel involved," Gage said. " 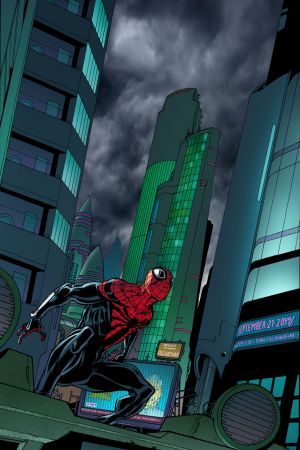 Sharp-eyed readers will remember a period in Superior Spider-Man #19 when Otto vanished in a flash of temporal energy. Now we'll find out where he went, and what happened." "'Superior Spider-Man' #32 kicks off the edge of Spider-Verse," said Marvel's Spider-Man line editor Nick Lowe. "Superior Spider-Man finds himself in 2099, finally a time where science and intellectual advancement is at least closer to his genius. He needs to find his way home, but things get a little more complicated than that."