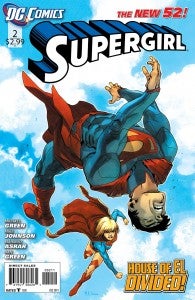 In their monthly "Ask Matt" feature rounding up fan questions for Superman Group Editor Matt Idelson, The Superman Homepage reported that the Superman titles will have a group-wide event story coming up this summer. "Keith [Giffen] and Dan [Jurgens] are plotting some really star-spanning stuff for Supes, though before that we'll be doing an event between Superman, Supergirl and Superboy in the summer," Idelson told a fan who was asking about what to expect in the year to come. "Superman hasn't met Superboy yet, and his relationship with Supergirl isn't exactly lovey dovey. Seeing how they function as a unit under those circumstances should be interesting, to say the least." This comes on the heels of yesterday's official announcement on DC's blog The Source of a similar Batman family crossover, "Night of the Owls," which will take place in May and be driven by the stories currently taking place in Scott Snyder and Greg Capullo's Batman ongoing. With the success of recent group events in the Green Lantern family of titles (including The Sinestro Corps War and War of the Green Lanterns), it's interesting to see that DC appears to be embracing that format in spite of Co-publisher Dan DiDio's repeated comments in the run-up to the New 52 relaunch that it would be quite some time before a universe-wide crossover story was told. Dan Jurgens, the incoming writer of Superman with #7, wrote the title for almost a decade during the 1990s, a time when four interconnected Superman titles existed and crossed over into one another almost every month. This would, at least in theory, make Superman uniquely suited to this storytelling approach among DC titles. The first crossover to happen between characters since the relaunch of the DC Universe occurred only last week in O.M.A.C. #5, a title co-written by DiDio himself. Idelson also hinted in the "Ask Matt" interview that readers would get "a taste" of the status of the DC Multiverse with the release of Action Comics #9, coming in March from Grant Morrison, who is supposedly still working on his Multiversity event story for the publisher.