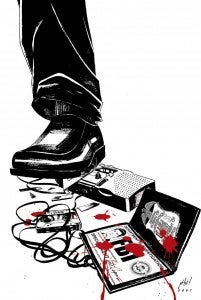 Remember a few years back, when Kyle MacLachlan, star of David Lynch's cult-favorite TV classic Twin Peaks, voiced Superman in Justice League: The New Frontier? Well, apparently that got somebody thinking. And then that somebody decided to reinvent DC's long-running Action Comics.

The dark, chaotic, supernatural, confusing and elaborate world of David Lynch's filmmaking might not seem like the first place you'd start if you wanted to relaunch DC's bright, shining flagship hero for "truth, justice and the American way." Yet this week's Action Comics #2 pulls back the curtain a little bit with regard to some of the ideas being batted around by writer Grant Morrison and artist Rags Morales--and the little person seen in Action Comics #1? Not only is he apparently a recurring character into whom a lot of thought has gone, but that thought was very...Lynchian.

In describing the process of creating and designing the character, Morrison said, "I was thinking of the dwarf from Twin Peaks--a gnome-like figure, a creepy little elf."

Never fear, though--for those of you who don't immediately jump to "David Lynch" when you think of Superman, artist Rags Morales had a somewhat different take on the character.

The artist countered with "I relied more on the Robert Blake character from Lost Highway...."

It seems that when a commenter at Bleeding Cool joked last week that DC's arcane timeline would lead to a confusing and frustrating continuity not unlike "The New DCU according to David Lynch," they might not have been so far off! Just one question, Superman: How's Annie?

The art accompanying this article is by Matt Haley, who did some pitch art for a proposed Twin Peaks: Season 3 comic book which, sadly, never came to pass. Read Haley's account of the attempt here.