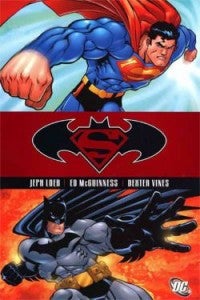 Another fabled installment of the DC animated universe will be available for purchase this fall. The previously reported Superman/Batman: Public Enemies has finally received an official release date of September 29, 2009. The film is based on the Jeph Loeb and Ed McGuinness stories of the same name, focusing on a world where archvillain Lex Luthor is President of the United States, and Superman is framed for putting the planet in danger. Fans of the various DC animated projects over the years should be excited to know that many of their favorite, talented actors are returning for this feature, such as Kevin Conroy in his iconic voice work as Batman, as well as Clancy Brown who has voiced Lex Luthor in both Justice League and the Superman animated series of the 1990's. While fans will have to wait a few more months for the release of this DVD, hopefully the talent assembled for this production will make it a little easier!