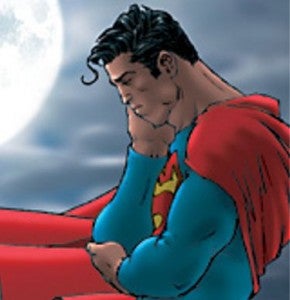 It's been just one of those weeks for the Man of Steel. Superman should have been celebrating this past week as Action Comics reached issue #900, but instead, it turned into a week where Superman probably wishes he had just stayed in bed. First, Superman found himself under attack by the mainstream media and right-wing politicians. The second biggest news story of the week was how Superman was going to renounce his U.S. citizenship. What was the biggest news story of the week? Of course, it was that Osama Bin Laden was finally found and killed by the U.S. military, bringing forth a renewed wave or patriotism across America. Great timing on Superman renouncing his U.S. citizenship, huh? Of course, the negative publicity wasn't the only bad news Superman got this past week. It was also reported that a plaque honoring Superman creators Jerry Siegel and Joe Shuster had been stolen from outside the Ohio home where Superman was created. (Thankfully the plaque has since been returned.) To top it all off, Radio Iowa is now reporting that they even bulldozed down Superman's house. Or at least the house that was the birthplace to George Reeves, who played Superman on television in the fifties. The home was reportedly torn down due to safety issues, but we wouldn't be surprised if outraged right-wing political bloggers had something to do with it.

Superman's No Longer An American And They Bulldozed His House

PS5 Restock Leaks Ahead of Next Drop

Every Movie and TV Show Leaving Netflix in June 2022