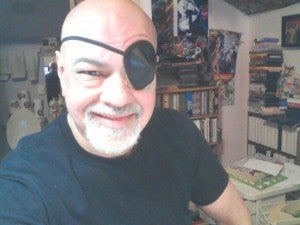 It's not entirely new information that George Perez, the artist on Crisis on Infinite Earths and scores of other best-selling and critically-acclaimed comics over the years for Marvel, DC and various other publishers, has been suffering some Diabetes-related vision problems--but fans who go see him this weekend at Project Comic Con in St. Louis might be a bit put off to discover the legendary penciller looking...well, a little different than usual. "I need to report that my eye troubles have taken a bit of a downturn as my left eye has experienced some hemorrhaging, pretty much blinding me in that eye," wrote Perez to his Facebook page. "This has necessitated my wearing an eyepatch in order to see a bit more clearly through my right eye." The artist, who earlier this year left DC where he had recently completed runs on Superman and Worlds' Finest to go BOOM! Studios-exclusive, said that "I'm not going to minimize the seriousness of my situation," but that he is still drawing and trying to stay positive. 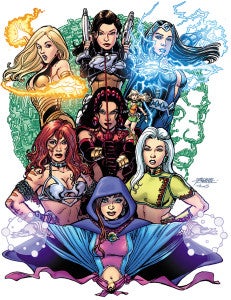 "My eye doctor is continuing a combination of laser and injection surgery, but there is a possibility that I may require scalpel surgery in the near future," Perez admitted. "I need to begin treatments that will better control my diabetes and blood pressure before he can do that, though." The artist also said that he had considered attempting to keep his condition under wraps for the time being, but that he knew upcoming convention appearances during which he needed to wear the eyepatch would make that impossible. Perez is currently working on his creator-owned series She-Devils at BOOM!.