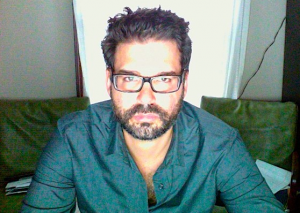 Director Judd Ehrlich is best known for his documentaries Magic Camp and Run For Your Life--but it's his current film, Science Fiction Land, that's likely to be seen as his "opus" once it's completed.

He has in mind a documentary film that incorporates some of the fantastical elements of its subject matter, bending genres and utilizing special effects--both contemporary methods and the kind that filmmakers might have had at their disposal if Lord of Light/Argo were really being made in the 1970s.

The documentary, which was actually handed off to him by another filmmaker after years of work, is being funded through Kickstarter, and fans who felt like Jack Kirby, Roger Zelazny and Barry Ira Geller didn't get the kind of representation they might have hoped in Ben Affleck's Argo will be pleased to find that there's quite a bit more information on the involvement of the comics legend--along with a book featuring his art--available to Kickstarter donors and viewers of the film.

Ehrlich joined ComicBook.com to discuss the long-gestating documentary, how it's different from the Hollywood version and what fans can do to support his work.

So--launching this campaign at the same time as Argo is getting Oscar buzz is kind of ingenious.

This was a project that we started long before Argo, so it was not made with Argo in mind--but the Kickstarter launch was done with Argo in mind because we felt like it was an opportunity to have some more interest in the story.

We didn't know quite how successful Argo would be, but we knew it was going to be a big film--that there was a lot of money and a lot of star power behind it, and it was going to get far and wide. If we wanted to get this film completed and get the finishing funds that we needed, it makes sense to launch the Kickstarter campaign before Argo. I think we launched it about eight days before the release of Argo.

Now, most people start Kickstarter before they start the project, but that's not the case here, right? At what point do you decide to crowfund?

Well, this is my fourth documentary film and it's the first one that I've done on Kickstarter. I really felt like this was a great project to put on Kickstarter for a number of reasons--one we've already talked about with Argo.

Another is that the nature of the project really lends itself to Kickstarter. The mission of Science Fiction Land was to be open sourced--to have technology available to everyone and take it out of the hands of corporations and patent holders and through technology comes power, which is also one of the themes of the book Lord of Light.

So I think Kickstarter being this incredible new technology where people from all over can help realize a project really makes sense with the project, and it sort of calls up the contrasts to a film like Argo that's funded in a very different way--it has Warner Brothers behind it, it has millions of dollars, it has a huge marketing budget behind it and publicity machine and we're making an independent film. We're telling a story that's more complex, that's not as straightforward. it's not a political thriller, this is a story that's really layered and can only really be funded by something like Kickstarter. 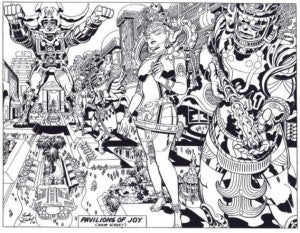 The very first message I got from your producers was about Jack Kirby and the way that he was all but removed from Argo--what can you tell me about some of those sorts of changes that people will see between your documentary and the Warner film?

There are so many. Basically what's always been intriguing to me about this story is not so much--again, Argo is really a political thriller, and it's played for suspense but in actuality the mission that Tony Mendez went on was pretty boring in that it worked pretty well. There was not a lot of suspense, there were not a lot of close calls. So in the film, they're being chased down the runway, everything is last minute, everything that could go wrong, goes wrong.

In real life, I think because he had such a good cover with the Kirby drawings, with the Lord of Light script which again--Roger Zelazny's Lord of Light was a a 1967 best-selling, Hugo Award-winning novel that became the basis for a script that was going to be the biggest blockbuster, biggest-budget science fiction movie of all time.

My interest was really in how this guy, Barry Ira Geller, assembled this all-star team of people in the late seventies to build this dream that he had of the film and also Science Fiction Land and then how everything came crumbling down.

And then it was only about a week later that Tony Mendez took the Lord of Light screenplay which he renamed Argo and the Jack Kirby drawings and used them as his cover in Tehran. Incidentally, those were delivered to him by John Chambers, who was working on disguises with him for the CIA but was also working with Barry and Kirby on the Lord of Light/Science Fiction Land project. So that was the connection: John Chambers took those materials and delivered them to Mendez and he was really the one that suggested this could work.

Again, we were dealing with many of the themes that I think are now brought even into focus with Argo coming out because we were looking at the line between fiction and reality, fantasy and reality, and so many of the characters sort of live in between those two things. With a Hollywood film coming out, it's yet another version of the truth, and one that many people will view as the truth but as we know it's very highly fictionalized and dramatized to make for a compelling film that's going to do big at the box office around the world. 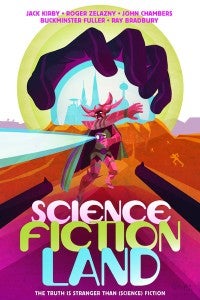 What kind of things, besides just the pacing and the tension, were added by Hollywood for Argo?

There are so many things. There was actually a really good story at Slate that broke it down, and a big section of that was what we're doing in our film. Again, what really was interesting to me and has been the focus of our film is the backstory that is not gone into at all. In Argo, they simply find a script that's sort of a B science fiction film, it's supposed to be a rip-off of Star Wars, it's kind of played for laughs, and it's already called Argo.

In reality, there's all of this other stuff that happened but to me it's about how all of the characters in the story that we tell really wear masks of one kind or another throughout their lives and are also really interested in stories that involve deception and fantasy. And so looking at all of those elements thematically has really been interesting and I don't think that in a political thriller that's something you can really get into.

When you're making a documentary, you can look at a lot of different version fo the truth. There doesn't have to be one answer, you can let the audience decide for themselves. Versus a Hollywood film, you're presenting one version of events and hopefully people will view it as such when they're watching it but I think that all too often, that becomes the record. That is also, as I said, very interesting because a lot of the characters in the documentary ar every taken with film, very taken with mythmaking. I think Hollywood is expert in mythmaking and storytelling. If you can go into a movie and be excited by it, be moved by it, then that makes an impression on you and that stays with you.

My hope is that people who saw Argo, enjoyed Argo, will then want to know more about the story. This is what we've found already just with Kickstarter--they want to know more. Then they'll watch our film and it will take them to sort of a deeper place as they learn more about the story and think more about the themes of the story that transcend the specific craziness of these plotlines. For Barry, this was his dream that went up in flames but then twenty years later he found that the work that he did was actually used to save people's lives and that put a new spin on things.

At the same time, it was stolen by the CIA, and if you're a Jack Kirby fan, you know that he's somebody who's always been under-appreciated, under-credited and not compensated and stolen from and all of those things. It's interesting again that Barry's vision for this and the reason I think that people signed on for it was that he wanted to open source these things and not have people being taken advantage of and not having a small number of people controlling technology and controlling this knowledge, but everything sort of went down.

There are questions raised as to the timing of it, since Tony Mendez took off like a week or so later. So people that we've talked to did raise whether the CIA wanted a clear cover and whether they had something to do with bringing Science Fiction Land down. So it's a very complicated and interesting story which I think has been part of the challenge in putting a film together and why it's taken a while and why I've made other films during the time of still trying to work on this.

And where did you first come across this story? It's better-known in Canada, but here in the States I feel like a lot of people never really heard of it until Argo was being promoted.

A woman named Diane Bernard, who's a friend, was a researcher for the documentary filmmaker Errol Morris on his documentary series First Person, and Errol did a piece on Tony Mendez. Diane was a researcher on that piece. During that interview, Tony talked about stealing the script and these drawings which turned out to be the Jack Kirby designs and Diane wanted to know more.

Where did these come from? This was nothing something because in Argo they say these were storyboards created by the CIA, but it was clearly not that.  This was clearly something that he took, or rather something that John Chambers had delivered to him. He didn't actually use the name at that point, he was using Chambers's code name, which was Jerome. So she wanted to find out more and she tracked it back to Barry Ira Geller and she started the process of making this documentary way back in 2000. She brought it to me several years later when she was changing careers. She felt that she wasn't the one to finish the project and she felt like I would be the person to do that so she brought the project to me and I took over.

With Argo, they bought the rights to the story through a 2007 Wired magazine article, and Diane was actually interviewed for that article. They didn't quote her, but they used a lot of the information that she provided, so again it's interesting. What you'll hear most is that the story was declassified in the late '90s but it really came to light in 2007 in this Wired article--when in fact people had written about it, Errol Morris had done this, Diane was making this film, I was then working on the film and things were happening but this is the way that Argo sort of presents it--that they bought the story from Wired and bought sort of a chapter of Tony's book, Master of Disguise, where he talks about this. It's a way that they can kind of skirt life rights issues and things like that.