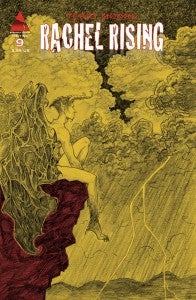 Terry Moore's Rachel Rising #9, which hit the stands last week, was a doozy. If the series is--as has been said a number of times by fans, critics and even Mr. Moore and myself--a bit like David Lynch's TV classic Twin Peaks, then this was the revelation of Bob's identity. Luckily for all involved, ComiXology has digital copies of everything now, because if a reader were to miss this issue, they would be really, really lost. That said, Moore pulled it off beautifully. Issues with this much exposition and this many revelations are incredibly hard to pull off, and they often feel clunky or awkward. This one worked really well, and left readers with a new status quo that's as creepy as it is inspired. Moore joined us to talk about the issue and its impact on the series. I want to say, it's kinda interesting that after that rather horrific final few pages last issue, we didn't immediately start out with a reaction from the graveyard. Is that coming? In my mind, the police went out there and lots of men ran around trying to make sense of it. But didn't show it because it wasn't as important to the girls and their story. Just one of those bits of chaos they leave in their wake, like James Bond. A while back on Twitter, you said that you had used one of your own dreams as a sequence in Rachel Rising #9. Can you tell us what part of this very trippy and dreamy story it was? The nightmare of walking up to a farm where everything is dead. In the house you find the dead occupants. In the kitchen you find the murderer, calmly eating a sandwich. It's a 10 year old girl. Now that's a nightmare. I shouldn't go to bed thinking about my stories. Things in this issue seem to be moving very fast; is there any connection there to the fact that you've decided to move on from Rachel Rising after 30 issues, as opposed to keeping it open-ended as originally announced? No connection really. It's just time to play the cards I drew. I established all these characters, now it's time for them to play their hand and choose sides. I'm thinking about the trade paperback, that this is about halfway in to TPB 2. And we're about halfway in to the series. So, the next half of the trade and the series as a whole will less about who's who and more about who does what. With the end now in sight, does that suggest that the other Terryverse characters appearing in the series in 2013 will be an organic part of the story? A distraction might seem off-putting. You can't force that stuff. It as to be an honest need organic to the story. Like Tambi's appearance in Echo. This is a supernatural world where anything can happen. Any chance we'll get to see David Qin again? Ooh, that's twisted. That never crossed my mind. Now that we've got a name to go with the face, I have to ask: When will we find out more about Lilith's backstory? Spoilers. Answer in issue 10. And Malus sounds familiar, too, but I wasn't able to quickly and easily find one. Is he new? Now I can talk. Yes, Malus is mine, but the name is familiar to the educated because it's simply the Latin word for evil. Nice fit, huh? I like the idea that the condition of evil was named after this demon who predates humanity. Somewhere along the last 4,000 years we lost track of that. Knowing now that Malus is playing his own game, will we start to see a bit of Lilith's agenda coming into focus? Lilith plays her hand in issue 10 and you'll know a lot more about her, what and why. So there's another woman, according to Malus. Will we get to see her? If we don't, she'll get away scott free and birth the anti-christ. We got some major revelations this month regarding Zoe. Now that we know some of her nature, will the story be filling in some of the blanks? I have a way of filling in blanks with a few lines. Not everything is worth a full stop detour. But I have written a sequence of Zoe's childhood in quick summation. I probably won't use it because it really isn't needed to move the series forward. And without spoiling the ending for the non-readers in the audience--does that last panel mean what I think it means? My answer is carefully revealed in the next issue. So, basically, issue 10 is a spoiler for issue 9!

Terry Moore: "I Shouldn't Go To Bed Thinking About My Stories"

My Hero Academia Cliffhanger Kicks Off the Anime's Final Act