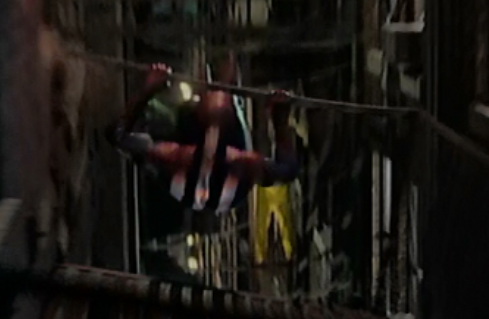 This one's not very subtle--and it will send some Amazing Spider-Man conspiracy theorists digging through the archives to prove they were right all along!

On the Daily Bugle viral site, Sony have posted a new entry that seemingly hints at the presence of the Spider-Man villain known as The Shocker.

According to the Marvel Wiki, "Herman Schultz was a career criminal who, after several prison terms for robbery, built a battle suit that sent out shock waves to quickly open safes as well as give himself a one-up on the authorities. The Shocker had the ability to shock his enemies with his hand held vibro-shock units, but because the vibrations were so fierce, he wore a heavily insulated suit."

With yellow pants, as seen above.

Here's what the Bugle has to say today...

The NYPD are the city’s greatest heroes, but sometimes even heroes are left scratching their heads. For instance, when $200,000 goes missing from the armored vault at G.K. Mason Bank.

Detective Stan Carter of the NYPD Major Crimes Unit was on scene to comment, stating, ”There’s still a lot we don’t know, but it looks like some kind of sustained vibration literally shook the door off its hinges and ripped the walls apart in the process.” Security cameras inside the bank were damaged upon the immediate forced entry of the robber, denying police a clear view of the perpetrator or the means of rupturing the vault.

When asked if the NYPD had concerns that the nature of the crime might indicate heightened super-human activity, Carter said, “There’s no evidence to point to that yet. When we catch him, we don’t expect anything more than a common crook with a clever toy.”

How many villains is that now in this movie? Six?!