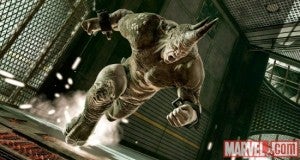 The formula is simple, and it's worked for years: Shoot a blockbuster film and create and launch a video game to complement the storyline of the movie.  Only this time, Marvel is switching things up. While the 'Amazing Spider-Man' movie features The Lizard as the bad guy, the 'Amazing Spider-Man' video game is going in a different direction.  The Rhino will be the heavy for the game.  And wow, is he someone you don't want to cross. Low level thug Aleksei Sytsevich is injected with a cross species serum that turns him into part rhino, part man.  Except the rhino portion of his body and mind is in control.  And with that temper, he's going to cause a lot of damage.  Check out the trailer: