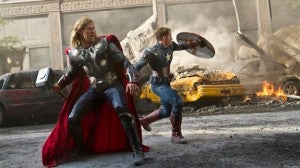 A fan-maintained website called MovieMistakes.com has listed The Avengers as 2012's most error-ridden movie to date, according to a story at MTV's Splash Page blog.

Most of the mistakes are really just minor continuity errors--things like a wound that heals from scene to scene or a car being here one moment, gone the next--and it's certainly possible that more errors have been caught in The Avengers because more people have seen it than any other movie this year (by a substantial margin).

Still, some of them--especially where a lot of CG is involved and it seems like it should have been spotted--are a little silly. According to the site, for instance, Bruce Banner is wearing brown pants immediately before transforming into the Hulk, at which point his pants are Hulk's iconic purple. Why wouldn't that be caught at some point in the production, given that everyone in the building has to know that Hulk will be wearing his purple pants? And one of them in particular--that Black Widow is talking to Banner, and can be seen in a mirror, but her reflected image is not speaking--seems easier than any other to avoid: why have her reflected there under those circumstances?

At any rate, sites like this are meant to be fun, so don't get your Captain America underoos in a twist. The Hunger Games, which was liked by critics and audiences almost as much as The Avengers, has 13 errors listed compared to 17 for the Marvel team-up flick. That's pretty indicative that the better a movie does, the more likely people are to love it enough to spot the minor imperfections. Take a look through the list and see if you noticed any of them while watching--or better, if you spotted any that aren't on there!

The Avengers: A Case of Mistaken...Well, Lots of Stuff...