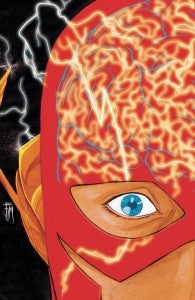 Barry Allen won't just appear in a single episode of Arrow before moving on to his own series, but will be a recurring player on the hit CW drama based on DC Comics's Green Arrow, Flash showrunner Greg Berlanti confirmed today at the Television Critics Association. Deadline has the details, with Berlanti saying that Barry Allen's story works both within the confines of Arrow and as its own, stand-alone story. He also said that the thinking is that The Flash works better than the other DC heroes we might see this year as a spinoff property. Here's the pertinent bit from the Deadline story:

Berlanti will be co-writing the script, an origin story of Flash's Barry Allen identity, with fellow Arrow co-creator Andrew Kreisberg and DC's Geoff Johns who also writes for the CW's hit freshman drama. Berlanti assured that the Flash project has been cleared with DC and is good to go. "Barry Allen's story always has been a favorite of mine," Berlanti said, "as well as of Andrew Kreisberg and Geoff Johns." He confirmed that Barry, who will recur on Arrow next season, will show up around episode 8 or 9 and that casting on the project will begin this week. "We wanted everyone to know about the show as that process commenced," Berlanti said. Why The Flash? "We think it fits well both in terms of (Arrow) and (as a stand-alone series)." He added that there's a wide belief that Flash fits better as a television spinoff than would other characters in the DC Comics universe.

Out today, Justin Chambers plays The Flash in his first-ever starring role in a feature-length film (albeit animated), Justice League: The Flashpoint Paradox. In the past, he's been played by John Wesley Shipp, Neil Patrick Harris, George Eads, Kenny Johnston, Alan Tudyk and more.

The Flash: Casting Begins This Week, Character Will Be Recurring on Arrow This Year