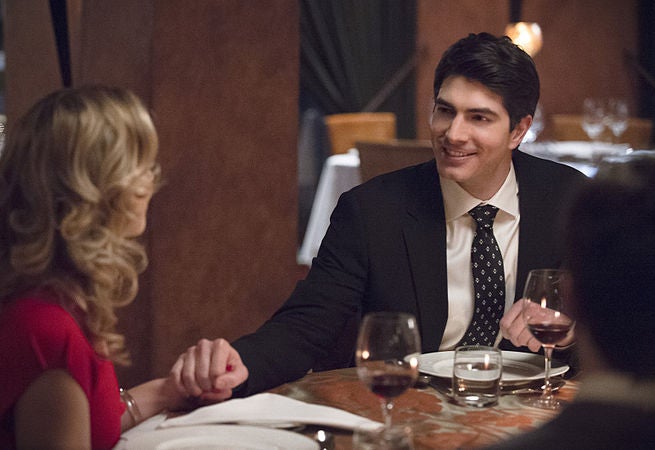 Tonight, there were bees.

The Flash had a fair amount going on, but if we missed anything, forgive us. We're going to blame it on that buzzing noise, and all of the terrible puns Emily Kinney was delivering.

Check out what we spotted below.

Cisco's "Bees. Why did it have to be bees?" is a twofer. Not only is it a pretty clear reference to Raiders of the Lost Ark and Indiana Jones' "Why'd it have to be snakes...

...but there's this classic (ahem) moment from Amazons Attack, too...

Look! Up in the sky!

What is it with billionaires being superheroes?

This is a disturbingly common trend, and one that everyone has made fun of at one point or another as comics fans. Good to know the genre-savvy is spreading to characters, too.

Hey...he made that shrinking thing with his hands when he said "The Atom." That's something, right?

His full-face mask debuts here, too, more like the suit he's been seen to use in the New 52.

Jill Carlyle, the Crimson Avenger, serves as a minor Spirit of Vengeance in DC Comics. It seems like a longshot that the unseen murder victim would be connected to her in any way, but since the two sounded so alike, it seemed worth at least a mention.

Brie Larvan is a reimagining of the classic DC villain, Bertram Larvan, also known as Bug-Eyed Bandit.  Larvan is actually most associated with The Atom, so it's perhaps not surprising that Brie appears for the first time in the episode that features The Atom. Of course, actress Emily Kinney revealed in an interview with ComicBook.com that she didn't actually get to spend much time with The Atom.

Amanda Pays returns for the second time this season as Tina McGee, the role she originated in the 1990 The Flash series.

That "we have the technology..." comment from Ray is a wink and a nod to The $6 Million Man.

...except, y'know. Clock King. And Shrapnel.

As contributing writer Emily Donn pointed out, the first time Cisco died, he was vibrated to death. The second time, he was vibrated to life. Either the writers are being a little heavy handed with the Vibe references, or all this vibrating is going to turn him INTO Vibe.

Here's something from KSite TV:

The Flash: Easter Eggs and DC Comics References In "All Star Team Up"