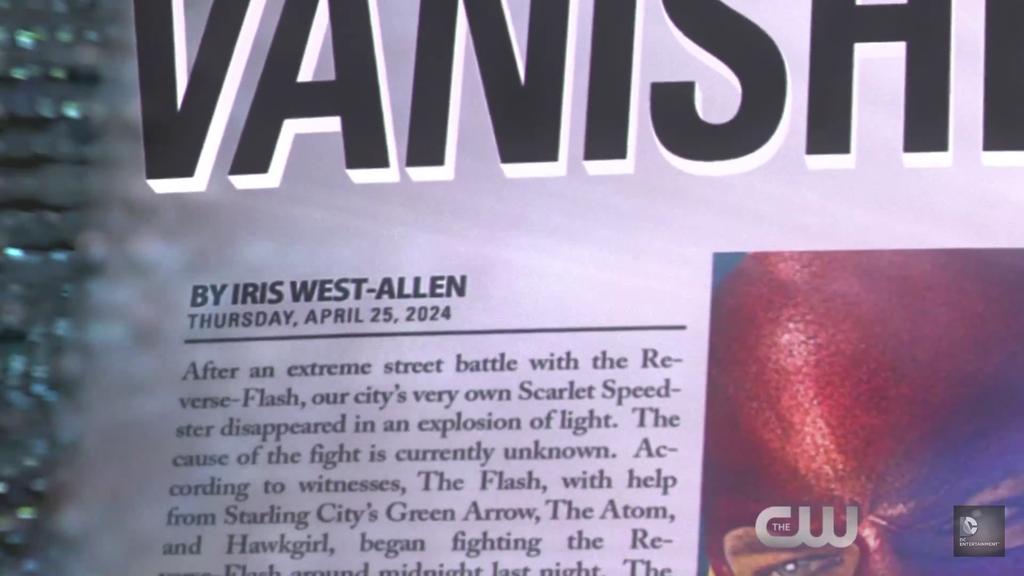 This was the most Easter egg-heavy episode of The Flash in a while, although it's worth noting that a lot of the buzz around that part of the show all came out of the same scene at the start of the episode.

That doesn't mean there wasn't plenty to spot if you were paying attention along the way, though...!

So...what did we see? What did we miss? Check it out below.

That newspaper is CHOCK FULL of Easter eggs.

Besides calling Oliver Queen's character "Green Arrow" instead of "Arrow," they also mention that when the Crisis is happening, the heroes of Central and Starling Cities are joined by Hawkgirl.

On top of that -- as noted in the dialogue -- the byline has changed. In the past, the story was attributed to Evan Gibson. This version of the story is written by Iris West-Allen, suggesting that in the TV series, as she did in the comics prior to Flashpoint, Iris will marry Barry.

We didn't get the "of the Justice..." here that we got in the comic teaser.

Not a DC reference, but whenever there's a notable pop culture reference dropped in the show, readers tend to want us to mention it here. In this case, Team Flash refers to the hidden room where Gideon is kept as a "time vault," the name of a Magic: The Gathering card.

When Joe is watching comatose Barry, we get a look at news reports coming out of Starling City's riots when Deathstroke mounted his attack at the end of Arrow Season Two.

Those lucid dream goggles created for Cisco remind me more than a little of the Vibe sunglasses/googles that he's always worn during his superhero career.

Barry's creating a vacuum with his arms is actually one of those uses for the speed powers that has shown up in the comics a bunch.

"Cali-ma," jokes Vibe about when Wells reached into his chest to kill him, even noting himself the comparison to Indiana Jones and the Temple of Doom.

Fans of the comics have known that Eobard Thawne is from the future for a while now, but this is the first overt references to it on the TV show that I can remember, with him having said previously that he had to get back to "my world." Here, though, not only does Team Flash figure it out, but there were a lot of references to "the future" in the present as well as in flashback.

Who is Eddie Thawne? It's hard to say. In any event, he's "insurance" in the custody of his ancestor.

What's interesting, of course, is that in the comics, even the modern day Thawne family is full of bad guys, so it's distinctly possible that the Reverse-Flash's designs on Eddie are to bring something out of him that Team Flash won't like.

The Flash: Easter Eggs and DC Comics References in "The Trap"