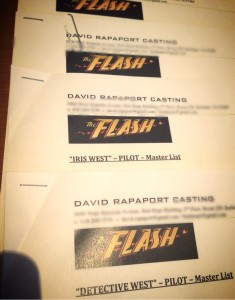 Casting director David Rapaport has released an image of some audition pages for The Flash, The CW's pilot spinning out of tonight's introduction of Barry Allen on Arrow. And, it's got a few interesting things on it. First of all, Rapaport Casting commented whenthey posted the photo that they're using an "old-school" logo. Specifically, they're using the Flash logo that was prominent in the post-Crisis on Infinite Earths era. More interesting than that, though, is the clear-as-day name "Iris West" on one of the cover pages. That, of course, is the name of Barry Allen's girlfriend, to whom he was married before the New 52 erased much of the history of the DC Universe. She's also the aunt to Wally West, who succeeded Barry as The Flash after he died in Crisis. In other words, Iris West's name appears on the cover of script pages bearing her nephew's logo, rather than Barry's own. That's almost certainly accidental, since it's very unlikely we'll see Wally right away, but who knows? If Nora Allen's murder implies that Zoom can time-travel, perhaps that will be an integral part of The Flash should it go to series. While it's pretty easy to assume that a character so key to Barry Allen will appear if his pilot should go to series, flirtations with Felicity Smoak in scenes released from tonight's Arrow have led some fans to suspect that they could carry on a long-distance relationship for a while, keeping a tether between Arrow and Flash. That could theoretically kept the need for Grant Gustin's Allen to have a love interest off the table for a while. Earlier this week at a screening of next week's Arrow episode, producers made a cryptic comment about the Barry's character which most in the room took to suggest that there would be a complex relationship, probably with Iris, going on in his own pilot. "[Barry] is familiar with liking somebody who doesn't like you back, which is something that probably will be explored further down the road," said executive producer Andrew Kreisberg. "He sees that about [Felicity]. It's certainly something we pick up in Episode ten, because the fallout from Episode nine carries over into the next episodes, as far as the Oliver and Felicity relationship is concerned. Barry has a profound effect on them, and that will carry through."