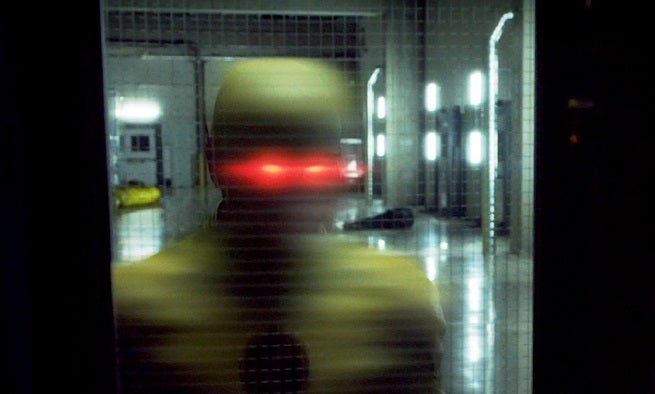 SPOILERS ahead for anybody who hasn't yet seen the midseason finale of The CW's The Flash.

Now that that's out of the way: Harrison Wells. What about that guy, huh?

Or maybe he's just working with the Reverse-Flash? In any event, he's got the costume stowed away in his secret room, and attached the tachyon particle device to its chest to...energize it somehow.

Well, of course, the obvious answer is time-travel. It's been clear since the premiere that Wells was capable of time travel in some capacity, or at least had access to technology and information from the future.

Of course, that doesn't particularly track with him being Hunter Zolomon, the Reverse-Flash everyone suspected that he might be.

We'll backtrack a bit for those just joining the party. 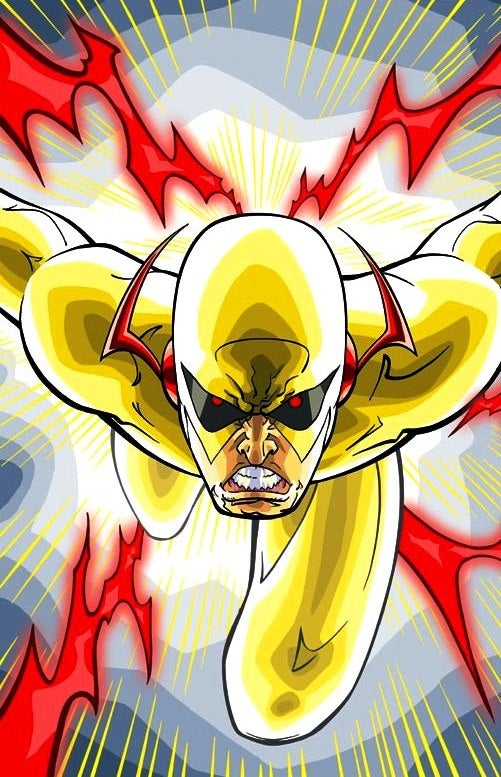 Of course, Harrison Wells appears to be actually attempting to ensure that Barry dies in the Crisis, becoming very alarmed when time was briefly altered to make it so that he did not. He also didn't cease to exist when time was altered, suggesting that he may not be from the future. 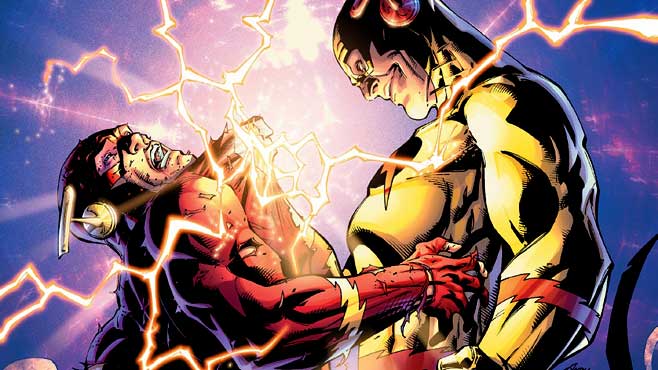 It's hard to say. Not only did the Reverse-Flash murder Barry's mother, but the implication that another speedster was there at the time -- Barry, or someone wearing his colors or accessing his portion of the speed field -- suggests that elements of the Flashpoint storyline, in which Barry successfully traveled back in time to prevent Thawne from murdering Nora, only to discover the damage done to time would be so massive he had no choice but to let her die, are in play.

Could the Reverse-Flash we saw tonight know that already? he did tell Barry that it was his mother's destiny to die that night. If Flashpoint already happened, it would be a clever way of avoiding the need to do an alternate-reality story (which can go hinky fast -- just ask Heroes) while still enjoying the fruits of the story in terms of character development.

You'll also notice that he never actually confesses to having killed Nora. He doesn't deny it, and he certainly uses it against Barry...but he never admits he did it.

"If you want to find that out, you'll have to catch me," he tells Barry when confronted about why he killed Nora. When Joe West asks him, he ignores it completely and then the only other reference to Nora's fate was the aforementioned "she was destined to die that night."

It's not impossible that both Reverse-Flashes are in play here. Could Zolomon, for instance, be actively aiding Thawne while pursuing his own agenda? That would explain how Wells could have been in more than one place at once without time-travel, which is the obvious answer at the moment. Of course, most people have been speculating that if it was Zolomon, it would be Wells while if it wasn't, it would be Eddie Thawne (Eobard is a 25th Century bastardization of Edward). Since he, too, was in the room with Zoom, either everybody is wrong or there's some time-travel going on there regardless.

...And let's not get into the fact that the jagged black at the bottom of the Reverse-Flash costume is reminiscent of Daniel West, the brother of Iris and current Reverse-Flash in the New 52.

Meanwhile, what about the thing with the costume? It seems likely he was infusing the costume itself with speed force (or negative speed force) energy; during the Wally West era, his costume eventually was made of speed force, meaning that he could draw from it for an extra boost and that he could more or less summon it at will without needing to change.

The Flash: What Did That Last Scene Mean?