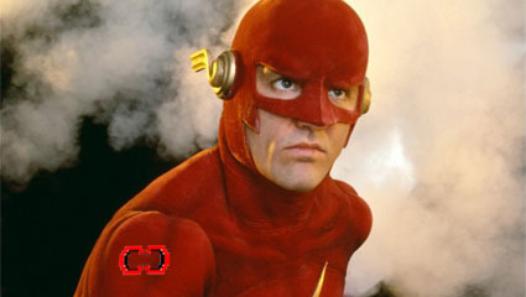 John Wesley Shipp has been associated with DC Comics's The Flash since 1990, when he appeared in a short-lived but much-loved TV series as Barry Allen himself.

Now, of course, he's playing Barry's wrongfully-convicted father in The CW's reboot of the franchise, a spinoff of their hit show Arrow.

At Comic Con International last weekend, Shipp met with ComicBook.com and other reporters to talk about the challenges of the original series, the surreal experience of relaunching it and whether he thinks a fun, light superhero show can thrive in the age of Nolan and company.

How do you feel about a reborn Flash and an opportunity to write yourself into that narrative?

Very rarely in any walk of life, especially in my profession, do you get the opportunity -- if I may use the metaphor -- to return to the scene of the crime.

Were your memories of your Flash happy ones?

You know, it's the hardest thing I ever did. When I saw Grant [Gustin], I hadn't seen him since the pilot and I said, "Is it starting to get real yet?" Because oh, my God, you know?

And of course we don't want to hear people who have been gifted with the opportunity to play superheroes whine endlessly about the suit. You could have avoided the suit -- I could have avoided it by simply saying no to the role. I certainly didn't want to do that. Having said that, it's the hardest thing I've ever done in my life. You know, with the glue and not being able to clean it and breaking out and it still being wet at five in the morning when I put it back on and wearing -- $100,000 to make four suits in 1990, you know? -- so wearing $25,000 worth of foam latex which they had to spray with the sealant becuase I'm sweating through it. All that stuff! Putting the glue on, taking the glue off...what was your question?

You're playing The Flash's dad but Grant has this unique opportunity of somebody who's been through this already. What advice have you given him?

I was asked that on Dawson's Creek. They said, do you give advice to the young actors and I said, oh, God, I hope not. And if I do, I hope they stop me because believe me, that young man needs no advice.

I tuned into Arrow when I found out what I would be playing to see the way he worked and what I was delighted to see was absolute sincerity that he brings to the part. There's no acting. It's sincerity; he is who he is and when he would talk about his dad, he certainly didn't know that I was playing the role, but whatever he was drawing on, I couldn't find the seams. I couldn't find the acting, which I loved.

After the pilot and working with him in the pilot and particularly in that last prison scene, I was like, "Wow, this kid has chops." He can do the comedy, he can do the goofy and then he can turn around and break your heart.

And let's face it: it's 2014, it's 23 years later. It's about time we got a clue that The Flash's thing is speed and should be aerodynamic! [Laughs] We were still in post-Mack McGwire/Jose Canseco/Pumping Iron hangover in 1990 so The Flash had to be...we did cut the suit down as we went but it makes absolute sense where they're going. People say "Is it familiar?" I say in the sense that you walk up to a familiar door, you open it and you're in a brand-new house. The whole idea of Emmet Walsh (who played my dad, and Priscilla Pointer played my mother) -- the idea of Emmet Walsh having killed Priscilla Pointer -- it's like poor Amy Irving is an orphan now?

But when i first heard, everybody was saying "Jay Garrick, Jay Garrick." But when I heard Barry's dad is wrongfully imprisoned in Iron Heights, wrongfully convicted of killing his wife, Barry's mother, I went, "That's the role." So I was delighted when they called and they offered me that role.

But to answer your question, it is an incredible opportunity. Of course there was a lot of pain. We were all working so hard. It was kind of good news/bad news: the bad news is, you're not renewed; the good news is, you're not renewed. Because relationships broke up, people's health declined, our guest stars by about the fifth day of an episode were walking around like "I can't believe you do this every week." But having put so much heart into something and it doesn't get the traction you'd hoped, there is pain to that. So to be able to return to that and have healing around that is a blessing, it really is.

Even with the heaviness to the backstory, I hear The Flash is going to have a lighter tone than Arrow.

Oh, totally. The thing that I like is the balance. The Flash has been somewhat problematic, hasn't it, in terms of bringing it to the screen. Maybe it has something to do with the gold ears; I don't know. Is there enough threat? Well, Geoff has solved that with the family. He's given Barry an edge with what he's dealing with -- my God. He's got a  compelling reason. Yes, I had the murder of my brother but the set of situations that Geoff has set up for him gives it the gravitas so it frees us up to have the humor without it being completely silly. What I love about the pilot is you're seeing all of these effects and you're laughing and wow, it's a great ride at the amusement park, then suddenly it slips it in.

But I like it -- and I also like it because it's true to Barry Allen. It's been hard becuase everything has to be so dark and we'll see. Everything is Game of Thrones, you have to be surprised every few seconds with a hatchet in the head or it's not entertainment. That's not going to be us. We're going to be sci-fi, there's going to be heart, there's going to be serious given circumstances but it's going ot be a ride at the amusement park and we'll see if modern sensibility will take to that. Becuase Gotham's going to have the darkness. Constantine's going to have the darkness. We're going to be the fun show and it remains to be seen -- that's the next chapter, isn't it?

The Flash's John Wesley Shipp: "We're Going To Be The Fun Show"