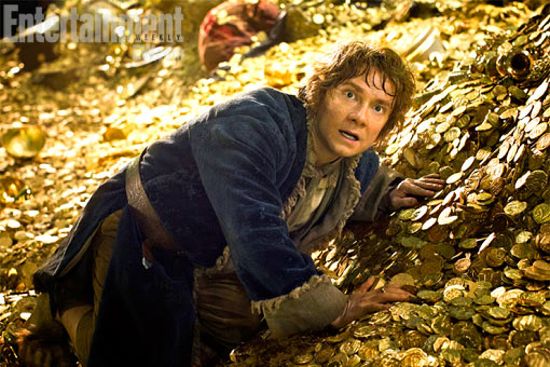 While The Hobbit: An Unexpected Journey has yet to arrive in theaters, Entertainment Weekly already has the first look at the sequel. Earlier today, EW.com released the first image for The Hobbit: the Desolation of Smaug.

The photo shows Bilbo Baggins climbing on top of a horde of gold coins, which would make Scrooge McDuck green with envy. Even though one might expect someone to be happy sitting on a pile of gold treausure, Bilbo Baggins has a rather alarming look on his face. Perhaps he spies Smaug about to make it rain fire.

The Hobbit: The Desolation of Smaug is set to be released in theaters in the United States on December 13, 2013.

The Hobbit: The Desolation of Smaug First Image Released