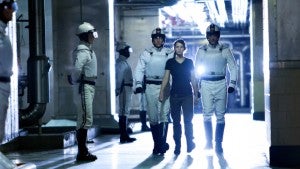 We said it on Sunday, but we'll say it again: "The Hunger Games" is going to smash more box office records. The film pulled in $21 million Monday and Tuesday--in March!  This isn't some summer blockbuster where people are on vacation and kids are out of school.  These are work/school nights, and the film is performing well.  So what does that mean? Well, first of all, at almost $177 million in five days, "The Hunger Games" now ranks as the 4th highest grossing film for the first five days (thanks to BoxOfficeMojo for the information).  More importantly, the film has sights set on the 2nd weekend total of $75,617,183 by "Avatar."  And we're telling you that the 2nd weekend total record is going to fall to "The Hunger Games." Why? Because many theaters were completely sold out last weekend.  The film plays to a much wider audience than just young kids. Adults are seeing this movie, and a lot of them didn't want to catch it in crowded theaters the first three days.  And there are going to be lots of young fans of the book and film that will see this movie 3-4 times.  Those are the kids that aren't able to go out on a school night to see the film.  They're coming this weekend, and they'll come in droves. Our prediction: $78 million dollar weekend for "The Hunger Games," breaking the all-time 2nd weekend record. So where does this put the film for a final tally?  As we stated on Sunday, we think the film is a shoo-in for $350 million.  With the performance from the past two days, we think $400 is now the new total.  And that means this film will outgross some BIG Summer blockbusters.