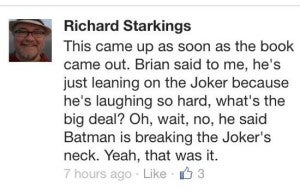 Earlier today, Grant Morrison set off a ton of debate on the Internet when during a podcast with Kevin Smith, he suggested that writer Alan Moore had Batman kill The Joker in an old storyline. Morrison said, "That's what I love about it, is that nobody's noticed–how many, thirty years ago it was? Batman kills the Joker. That's why it's called The Killing Joke. The Joker tells 'the killing joke' at the end, Batman reaches out and breaks his neck and that's why the laughter stops and the light goes out at the end, is because that was their last chance at crossing that bridge. And Alan wrote the ultimate Batman/Joker story–he finished it!" Well, Richard Starkings, who was the letterer on The Killing Joke, has weighed in with what he was told about the ending. In a Facebook post, Starkings wrote, "This came up as soon as the book came out. Brian said to me, he's just leaning on the Joker because he's laughing so hard, what's the big deal? Oh, wait, no, he said Batman is breaking the Joker's neck. Yeah, that was it." While some interpreted Starkings last point as actually confirming that Batman killed Joker, Starkings clarified via Twitter that he was not confirming Grant Morrison's take and was just being ironic. In fact, Starkings seems to be indicating that at least the direction from the artist Brian Bolland was that Batman did not kill The Joker.