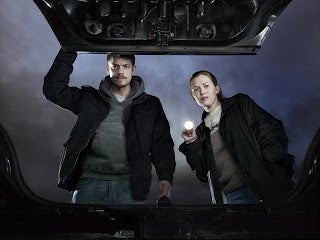 Still, that's what they've done; the popular rental and streaming video service will revive The Killing--the U.S. adaptation of the popular European police procedural which was cancelled twice already at AMC--for a fourth and final season beginning in 2014.

The six-season final season will present Seattle's committed homicide detectives Sarah Linden and Stephen Holder with a final mystery to give the characters a fitting finale, say executives close to the show.

“The rich, serialized storytelling in The Killing thrives on Netflix, and we believe that it is only fitting to give Sarah Linden and Stephen Holder a proper send-off,” said Cindy Holland, vice president of original content for Netflix. “We are looking forward to offering fans — both existing and new — a series that we know is perfectly suited for on-demand viewing.”

The series stars Mirielle Enos of World War Z as Linden and RoboCop star Joel Kinnaman as Holder. Enos, Kinnaman and showrunner Veena Sud are all committed to the fourth season.

Last year, AMC cancelled The Killing after its second season, only to reverse course and pick it up again after talks between the studio and Netflix showed it could be profitable. The third season aired this summer on AMC and in September, AMC cancelled it again.

The Killing Un-Cancelled (Again) For a Fourth, Final Season on Netflix