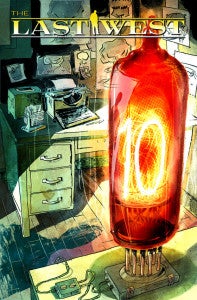 With just over a week to go, The Last West has more than doubled its Kickstarter goal on the way to, the creators hope, generating $10,000--enough to publish more issues of the comic and, hopefully, make it self-sustaining rather than having to go back to Kickstarter right away. After all, this is the series that, when they tried to fund the complete run at once, struggled and eventually discontinued their Kickstarter after finding a publisher willing to print the book if they could generate the publishing revenue. They returned to the well, asking for substantially less, and they've blown the goal away. "The Last West is a pioneering effort," wrote Dr. John Barber, PhD, from Washington State University in Vancouver. "It is art. It is literature." And it is, now, going to be published, with creators Evan Young & Lou Iovino asking fans to decide between a number of potential stretch goals for if they manage to make another $800 and change in the next eight days to surpass the $10,000 stretch. Check out the covers at the link above to chip in your two cents as to what you think would be the best print for backers--and then consider backing the book because that is, after all, the point of the whole exercise.