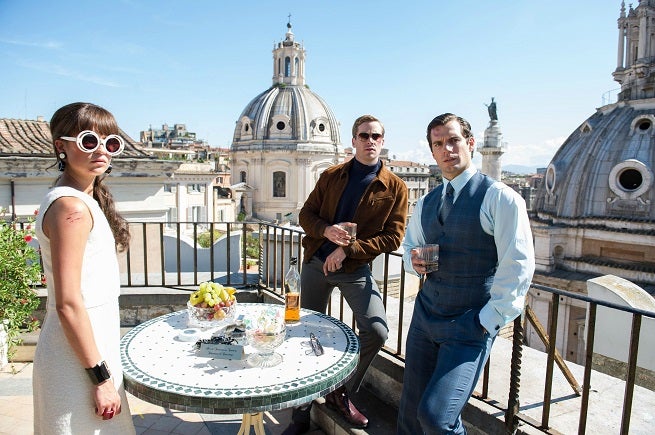 Man of Steel star Henry Cavill and The Lone Ranger's Armie Hammer, who nearly played Batman in an earlier iteration of a Justice League movie, appear alongside actress Alicia Vikander in the first officially-released still photo from Warner Bros.' upcoming The Man From U.N.C.L.E.

Vikander may not be as immediately recognizable as the men in the shot, but she's on the rise: she'll next appear in Ex Machina with Dredd's Domnhall Gleeson and Star Wars: The Force Awakens' Oscar Isaac.

Set against the backdrop of the early 1960s, at the height of the Cold War, “The Man from U.N.C.L.E.” centers on CIA agent Solo and KGB agent Kuryakin. Forced to put aside longstanding hostilities, the two team up on a joint mission to stop a mysterious international criminal organization, which is bent on destabilizing the fragile balance of power through the proliferation of nuclear weapons and technology. The duo’s only lead is the daughter of a vanished German scientist, who is the key to infiltrating the criminal organization, and they must race against time to find him and prevent a worldwide catastrophe.

The film, directed by Sherlock Holmes' Guy Ritchie, will be in theaters on August 14, 2015.